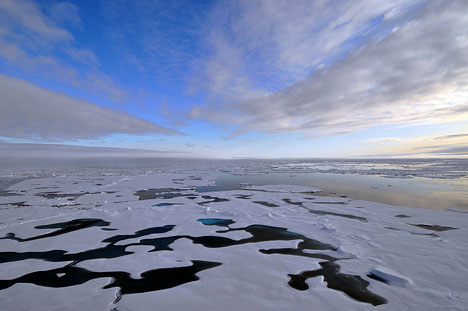 Photo: Patrick Kelley, U.S. Coast Guard/Flickr
Canada's top diplomat will discuss the Arctic with his Scandinavian counterparts in Denmark and Norway next week, it was announced Thursday, a trip that will raise suspicions in Russia.
Foreign Affairs Minister John Baird will specifically bring up "the challenges and opportunities facing the Arctic," said a statement.
He is scheduled to visit Norway, Denmark and Austria from August 22 to 27.
Russia and Canada have overlapping claims to the North Pole as well as large swathes of the Arctic that the US Geological Survey thinks could hold vast amounts of undiscovered oil and natural gas reserves.
All parties agreed to abide by international law to solve potential disagreements, but recently Russia and the West have been mired in an expanding East-West trade war over a bloody conflict in Ukraine.
Asserting sovereignty over an expansive Arctic archipelago and surrounding waters has been a key policy of Canadian Prime Minister Stephen Harper's government.
"The Arctic is fundamental to Canada's national identity and will play a role in Canada's future prosperity," Baird said. "Canada remains committed to working closely with other Arctic states, such as Norway and Denmark, to promote and protect its northern interests and to cooperate on a broader vision for the region."
The melting of the ice cap also offers shorter shipping routes between the Pacific and the Atlantic oceans, which has attracted the interest of countries far from the Arctic region, including China.