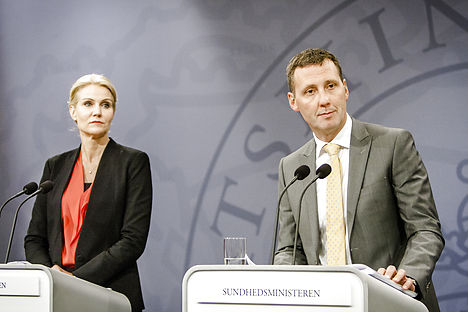 The new health strategy was presented by PM Helle Thorning-Schmidt, Health Minister Nick Hækkerup and Economy Minister Margrethe Vestager (not pictured). Photo: Simon Skipper/Scanpix
The government on Thursday released what it is calling an “ambitious” new healthcare strategy.
Among the highlights of the five billion kroner ($890 million) plan are better cancer treatment, earlier detection of chronic illness and better strategies for involving patients in their own treatment.
The money will be spent over the next four years.
“Free and equal access to healthcare is the crown jewel of the welfare society. We have carried out sound economic policies so now we can afford to invest in better cancer treatment, better treatment for the chronically ill and better opportunities for practicing doctors,” PM Helle Thorning-Schmidt said of the plan on Facebook.
As part of the plan, the government will also offer a yearly health check-up for socially marginalised men in a move the government says will help detect illnesses like diabetes and heart and lung disease earlier.
Several experts in the health field have criticised that element, however, saying that there is no medical evidence that standard health check-ups increase life expectancy.
“We have a very solid base of evidence when we say that general health checks have no documented effect – including for at-risk groups like men without higher education,” Karsten Juhl Jørgensen from Copenhagen’s Rigshospitalet told Politiken.
See also: Government to go on the offensive against cancer
The government’s plan to set aside 1.1 billion kroner for better cancer treatment has also been dismissed by many as being unambitious.
Denmark has the world’s highest cancer rates and just over half of all cancer patients survive more than five years after their diagnosis. The new strategy sets the goal of having three out of four cancer patients live past the five-year mark.
The health minister, Nick Hækkerup, said the government’s new strategy would provide the necessary investments for improving health for all.
“In Denmark everyone should have a good opportunity to live a good and long life and receive the best treatment when they become ill. That can only happen if we invest in our public healthcare system and set ambitious goals that we are ready to be held to,” he said in a press release.
In addition to the 1.1 billion kroner for cancer treatment, 1.5 billion is set aside for better treatment for the chronically ill, 1.1 billion will go toward making quality improvements in the nation’s hospitals and 800 million will go toward building new medical practice centres and upgrading existing ones.
Hækkerup said that the new medical centres will allow doctors to treat more patients than they do today.
“We will ensure that general practices are open when patients need them and that there will be good treatment options regardless of where one lives in Denmark,” he said at a Thursday press conference.
The government’s health strategy plan will be part of its budget proposal, which is expected to be presented next week.
The government’s entire health strategy, entitled The Sooner, the Better – Early Diagnosis, Better Treatment and More Good Years, can be read here (in Danish).

PARTNER CONTENT
European healthcare: how does your country rank?
Url copied to clipboard!