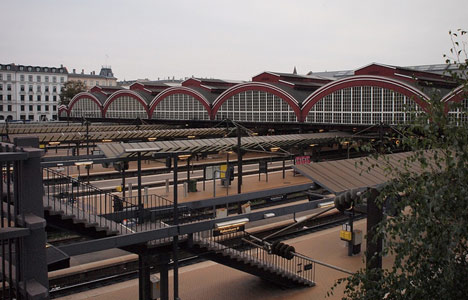 Copenhagen Central Station. Photo: Sigfrid Lundberg/Scanpix
A large number of Copenhagen Police officers, some of them armed with automatic weapons, responded to reports of a shooting near Copenhagen Central Station on Tuesday night.
Police cordoned off a large area near the sport complex DGI-Byen for nearly an hour as they searched for an armed suspect.
“We received numerous reports that a man shot at another man i DGI-Byen. There was also reportedly a hammer involved and the perpetrator was said to have fled toward Central Station,” police spokesman Peter Andreasen told TV2 News.
Although police arrived in large numbers and heavily armed, the situation turned out to be not as serious as first reported.
“Once we got an overview of the situation, it turned out that there weren’t shots from a real pistol, but rather from a paintball gun. It was a middle-aged man who had used it against another man. They were both in DGI-byen when we found them and we took them in to the station very undramatically,” Andreasen said.
According to news source Local Eyes, the arrested man was of foreign descent. Video of the armed police can be seen on Local Eyes' website.