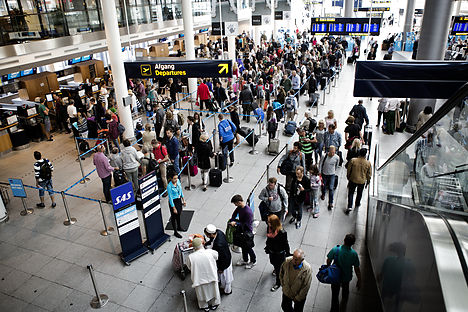 Photo: Betina Garcia/Scanpix
Business continues to boom at Copenhagen Airport. For the second month in a row, passenger numbers at the airport reached an all-time high.
With 2,596,230 passengers using the airport in July, the airport beat a record set just last month.
International traffic at the airport was up 7.4 percent, domestic traffic increased by 1.1 percent and charter traffic saw a 0.9 percent jump.
“Our traffic figures show that, apparently, people's desire to travel remained intact despite the fantastic summer weather in Denmark. This made July the busiest month ever in the almost 90 years' history of Copenhagen Airport," the airport’s CEO, Thomas Woldbye, said in a press release.
The nearly 15 million passengers who have used Copenhagen Airport through the first seven months of 2014 is just over one million more than the same period last year, representing a growth of 7.3 percent.
The airport announced last month that passenger numbers in June hit a record 2,523,108, an eight percent increase over last year, and that the airport set a new record for its busiest day ever, with 98,674 passengers on Friday, June 27th.
The top five destinations in July were London, Oslo, Stockholm, Paris and Helsinki.