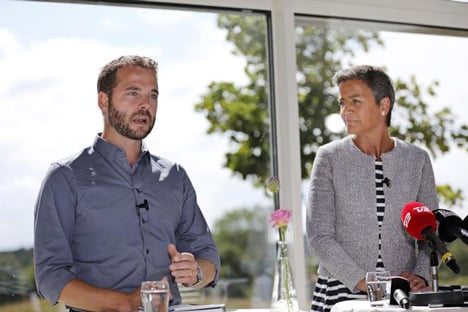 Morten Østergaard announced the terror commission at the Social Liberal's summer meeting, where he was joined by party leader Margrethe Vestager. Photo: Jens Dresling/Polfoto
The Danish government will set up a commission to examine the effects of the nation’s anti-terror laws on personal rights and freedoms.
The tax minister, Morten Østergaard, announced the move on Tuesday.
“In the words of former Norwegian Prime Minister Jens Stoltenberg, it is important that we don’t trample the same freedoms we are trying to defend,” Østergaard told Politiken.
Upon taking power in 2011, the Social Democrat and Social Liberals coalition government promised in its original policy platform to take a fresh look at Denmark’s terror laws. The time has now come to act, Østergaard said.
“For a long time now a discussion has raged – in Denmark, abroad and in the US – about whether some of the measures that were implemented in 2001 still have the same relevance today. If they were proved to be effective measures. The government now wants a thorough examination of that,” he said.
Østergaard said that the commission tasked with re-evaluating Denmark’s terror laws would take a look at what the laws have meant for the rights of everyday residents.
“It’s a good opportunity to ensure that central values like the rule of law, due process and personal freedom be combined with a strong defence against terror,” the tax minister said.
Denmark’s terror laws have been criticised for being too broad and vague and for giving police and national security agency PET too much leeway in intercepting communications and carrying out secret searches.
The Justice Ministry will appoint the commission in autumn and Østergaard said the government is prepared to listen to its recommendations.
“The government has already shown that we are of course willing to pull the plug on things that aren’t working and things that are simply surveillance upon surveillance,” he told Politiken.