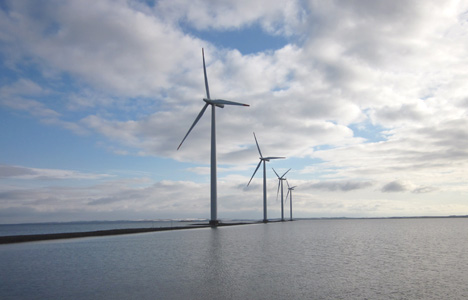 The Harboøre windmills. Photo: Siemens A/S
A windmill in western Jutland has become the first in the world to produce a lifetime total of 100 million kilowatt hours.
The windmill, a Siemens 2.3 MW turbine on the isthmus of Harboøre along Jutland’s west coast, passed the milestone over the weekend.
“It is a unique world record that we believe highlights the huge opportunities of wind power,” Siemens Wind Power spokesman Erik Winther told Danmarks Radio.
Three other identical windmills in the same location also passed the 100 million kwh mark shortly after the first.
Rasmus Windfeld, a spokesman for Siemens in Denmark, told The Local that the windmills' location is key to its output.
"It is placed on the shore so you have the price benefits of being onshore while also reaping the wind speed and capacity of the offshore environment," he said.
The Harboøre windmills have been in place since 2003, but Windfeld said that more powerful wind turbines currently being installed mean that in the future it won’t take nearly as long for windmills to top the 100 million kwh mark.
“It's a nice distinction to have, but this record-breaking electricity production will be beaten in three years. It's really just a question of how big and powerful the turbine is, where it is placed and how long it has been there," he told The Local.
According to the Danish Wind Industry Association, 33.2 percent of the electricity consumed in Denmark in 2013 was generated by wind power, the highest level in the world.