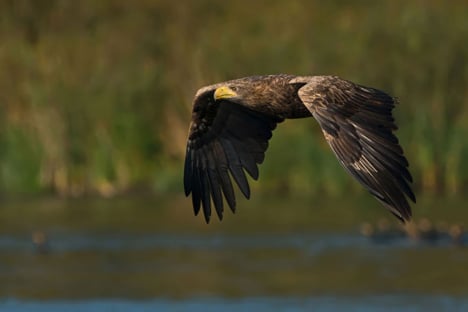 Photo: Torben Andersen/Dansk Ornitologisk Forening
Denmark’s white-tailed eagle population is at its strongest in 100 years.
Some 80 eagles born during this year’s breeding season recently took flight across Denmark. The 56 breeding couples behind the eagle baby boom is a record, according to the Danish Ornithological Society (Dansk Ornitologisk Forening – DOF).
“The white-tailed eagles have an ever-expanding population that is increasingly distributed across most of the country,” DOF’s Lennart Pedersen said in a press release last month before the hatchlings were born.
Speaking to Danmarks Radio on Sunday, Pedersen said that the record eagle population could prove to be even larger.
“In autumn, when the leaves fall from the trees, we could discover some up in the treetops that no one has noticed yet,” he said.
According to DOF, the white-tailed eagle population was nearly non-existent in Denmark for up to a century before making a comeback in 1996. Since their return, DOF estimates that nearly 500 white-tailed eagles have been hatched in Denmark.
“Denmark is a perfect country for white-tailed eagles, with plenty of food to support even more nesting pairs of Northern Europe’s largest bird of pretty,” Pedersen said.
DOF has set up a live nest camera in the Saksfjed-Hyllekrog nature reserve that can be viewed here.
A video highlighting some of the action in the nest throughout 2013 can be seen below.