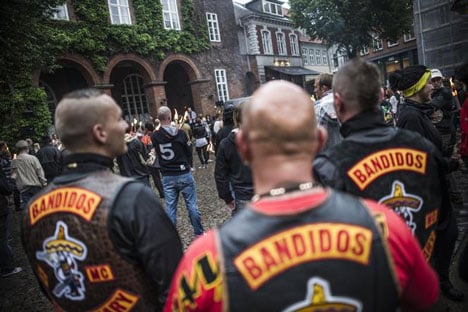 Among the gangs expected to be in Odense on Saturday are the Bandidos. Photo: Michael Hansen/Polfoto
Police on the island of Funen are fearing the worst ahead of a planned party in Odense that will bring together members of three rival biker gangs.
Funen Police announced on Friday that it would institute a stop-and-search zone from noon on Saturday through 1pm on Sunday. The ordinance will allow police to stop anyone within a predetermined area of Odense and search them for weapons.
Police said that the Black Army gang is planning a party to celebrate its one year anniversary in Odense. Members from the biker gang Bandidos and the Copenhagen-based immigrant gang Loyal to Familia are also expected to be present.
The biker gang Hells Angels also has a strong presence in Odense.
“Due to the internal tensions within some gang factions and tensions between the rival gangs, Funen Police fear that there could be a violent clash – possibly involving the use of weapons – in connection with the party,” a police press release read.
Black Army has reportedly been under close police observation and two men in Jutland connected with the gang were arrested on Thursday for weapons possession.
In addition to their strong presence in the Odense area, the gang is reportedly eyeing an expansion into Aarhus.