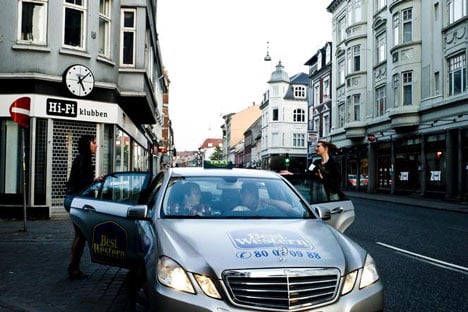 Photo: Helle Arensbak/Polfoto
A Copenhagen-based taxi company’s attempt to expand into Aarhus was met with threats and aggressive driving behaviour from Aarhus’s existing taxi firms.
The taxi company 4×27 has had success in Copenhagen with its partnership with the mobile app Drivr, which allows customers to find and order a cab from their phone. Based on that success, the company wanted to expand into Denmark’s second-largest city, Aarhus.
Upon arrival however the newcomers faced harsh resistance from established taxi companies.
“The drivers from the other companies followed our cars, flipped us the bird and made throat-cutting gestures at our drivers. It was a very uncomfortable situation that felt like something out of a banana republic,” the head of 4×27, Thomas Petersen, told Politiken.
Petersen told the newspaper that several of his drivers were so frightened by the experience that they now refuse to drive in Aarhus.
“They are so intimidated that they don’t even dare to speak out and they don’t dare take the next step of going to the police,” he said.
Behind the conflict is a disagreement over 4×27's legal right to operate in the Aarhus areas. Dansk Taxi Råd, a business lobby group for the taxi industry, argues that 4×27 was driving in Aarhus illegally.
“The starting point under Danish law is that taxi companies need a permit to service residents in a specific municipality. So therefore we think that 4×27 is making a very creative interpretation of the law, which we don’t believe is correct,” the head of Dansk Taxi Råd, Trine Wollenberg, told Politiken.
The people behind both 4×27 and Drivr, however, argue that their business model exempts them from existing taxi regulations.
They say that users of Drivr can only order taxi rides directly from the app, that customers cannot pay in cash and that the vehicles ordered via the app do not have traditional taxi signs on top. 4×27 and Drivr argue that this means their vehicles do not compete with taxis who pick up passengers on the street.
The case will be taken up by the Danish Transport Authority (Trafikstyrelsen). Until then, Drivr and 4×27 have withdrawn from Aarhus, leaving the Drivr app only available in Copenhagen and London.
Taxi drivers in cities worldwide have faced new competition from apps like the San Francisco-based Uber, which allows customers to order vehicles for hire and ridesharing services. Uber has led to confrontations in cities such as Paris, Barcelona, Madrid, Rome and Berlin.
Uber recently announced plans to launch in Oslo, and although the company has made no official announcement about Copenhagen, a company called Uber Denmark ApS was officially registered in 2013.