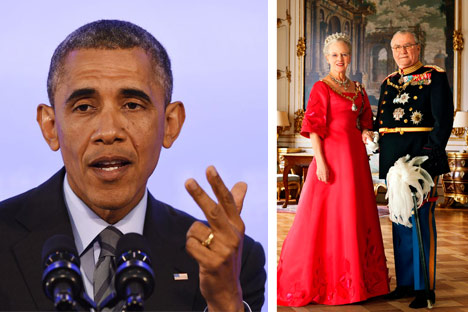 Obama counting how many royal portraits he has. Photos: Jewel Samad/Scanpix; Jacob Jørgensen
The Washington Post’s politics blog The Fix has ranked every single gift given to US President Barack Obama between 2009 and 2012, and Denmark is singled out for its lack of creativity.
Denmark didn’t get the lowest mark in the ranking of 274 official gifts – that went to Poland’s swag bag promoting the video game Witcher 2 – but its three gifts to Obama were awfully close. The ‘best’ gift came in at number 246. That was a wood-framed photograph of Queen Margrethe and Prince Consort Henrik given to Obama in 2009 along with two books on Danish history.
Books and a photo of the royals are clear themes in Denmark’s approach to presidential gifting.
In 2009, Denmark also presented Obama with two books: Richard Haass’s Restoring the Balance: A Middle East Strategy for the Next President and the International Institute for Strategic Studies’ annual global military assessment, The Military Balance 2009.
Hardly riveting stuff compared to the ping-pong table delivered by the UK in 2012 or the four bottles of tequila that Mexico gave Obama in 2009.
But The Fix really found Denmark’s 2011 gift lacking. No wonder, given it was once again a framed photo of Queen Margrethe and Prince Consort Henrik. It was even the exact same size as in 2009.
“But honorable mention to Denmark! Denmark on two separate occasions gave Obama signed portraits of its Queen and prince. 'Here is a picture of me' is a bad gift once. But twice? Come on, Denmark,” The Fix’s Philip Bump wrote.
The Fix also snuck in one last dig at Denmark in a correction attached to the bottom of the complete listing of Obama’s 274 gifts.
“This post originally referred to Denmark's King and Queen. Denmark doesn't have a king, but a prince. Perhaps we need a photo of them to clarify,” it read.
You can find the presidential gift rankings here.