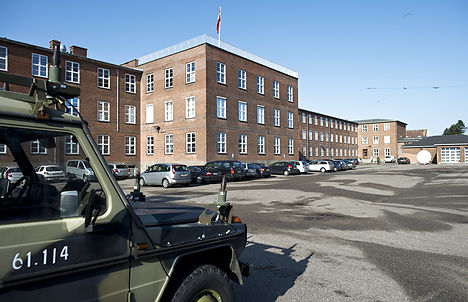 Rather than sitting empty, closed military barracks should house foreign prisoners, DF says. Photo: Claus Fisker/Scanpix
Foreign criminals should be housed in the nation’s abandoned military barracks, the Danish People’s Party (DF) said on Tuesday.
DF said the move would cut costs for the Danish prison system.
“This is actually a savings suggestion, as it should go without saying that it would be cheaper for society if 12-15 men slept in the same room rather than in one-man cells,” DF’s Peter Skaarup told Danmarks Radio.
“So this would be a savings that would also free up space in the prisons for the biker and immigrant gangs that are hard to control in prisons today,” he added.
Skaarup said that the roughly 1,100 foreign inmates currently in the Danish prison system should be treated differently than Danish prisoners. For example, he said foreigners should not be given the same access to education as locked-up Danes.
Just last week, Venstre also spoke out against what the party views as lush conditions for foreign prisoners.
“[Foreigners] don’t fear serving their time in Denmark. Some of them can earn more money while sitting in Danish prisons than they could by working in their homelands in eastern Europe,” Venstre’s Karsten Lauritzen told Jyllands-Posten, referring to prisoners’ ability to engage in job training at a rate of 9.6 kroner ($1.72) an hour.
Lauritzen said on Wednesday that DF’s suggestion to house inmates in military barracks was a good idea.
“Venstre has said that we need to tone down the conditions for foreign prisoners because they are so lucrative in comparison to where the foreign criminals come from,” he told DR.
“If people in boarding schools, folk schools and national servicemen can sleep with many people in one room, then it is weird that it should be seen as a human right to have your own cell as a criminal in prison,” he continued.
In 2013, the Defence Ministry shut down military barracks in Fredericia and Sønderborg and partially closed down barracks in Vordingborg as part of a 2.7 billion kroner ($484 million) savings exercise.
In July, the Danish Immigration Service (Udlændingestyrelsen), announced that the number of deported foreign criminals has jumped from 1,020 in 2011 to 1,810 in 2013 – an 80 percent increase.