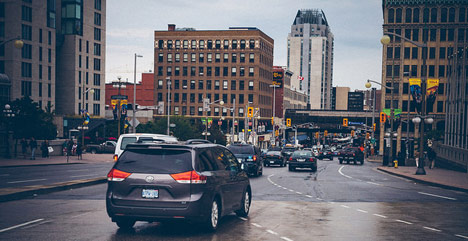 Ottawa traffic. Photo: Michael Nugent
When Holly Chabowski, a British national living in Aarhus, wrote an email to Canadian politicians about how “horrified” she was to be confronted with “great oceans of car parks” in their country, she didn’t expect it to be a big deal.
But her criticism was picked up by the Canadian press and quickly spread via social media. Canada’s top-rated television network even committed a two-minute news segment to it on CTV Ottawa.
Speaking to The Local, Chabowski said she hoped the attention would blow over shortly and stressed that she “truly had a great time in Canada”.
“The feedback has been a mixture of hilarity and also a little bit scary,” she said.
Chabowski acknowledged that she could understand why some Canadians thought that she came off as arrogant in the letter, but said she is simply passionate about sustainability and urban planning.
In the letter, she wrote that her “overwhelming memory of Canada is one of cars, traffic, parking and the related obesity and unfulfilled communities.” She wrote how appalled she was to see Canada’s 12-lane motorways and an infrastructure in which pedestrians are “treated like second class citizens compared to cars.”
“Walking and cycling are human activities that bring great life, health and economy to communities. Streets that prioritise cars over humans are bad for business, bad for health (mental, social and physical), unsafe and break down communities,” she wrote.
But while she may have ruffled the feathers of many Canadians, CTV’s broadcast revealed that Chabowski’s letter had its intended effect. Suddenly, Ottawa Mayor Jim Watson was forced to go on TV and defend his city’s urban planning.
“I meet people all the time, from all over the world, that come here and are very impressed with the amount of green space, cycling facilities, the cleanliness of our cities,” Watson told CTV Ottawa.
“This has gotten so much attention because it’s obviously an issue that people really care about,” Chabowski told The Local. “I would encourage everybody who feels strongly about an issue, regardless of what it is, to do something about it. Whatever your issue is, I think you should stand up and direct your energies toward people who can make change.”
Chabowski said she hoped that this wouldn’t just be another round in the North America versus Europe debate.
“I think it’s important to have a discussion about how we plan our cities. The thing that I’m most interested in is that places should be designed for humans, not for cars,” she said.
With her less-than-flattering take on Canada’s car culture quickly making the rounds online, The Local wanted to know how this British transplant felt about her host country’s infrastructure.
“I’m big into sustainable transport and urban planning, and what struck me when i come to Denmark, is just how well they’ve done it. There are so many different options for getting around,” she said.
Chabowski’s full letter to Canada’s policymakers can be read here.