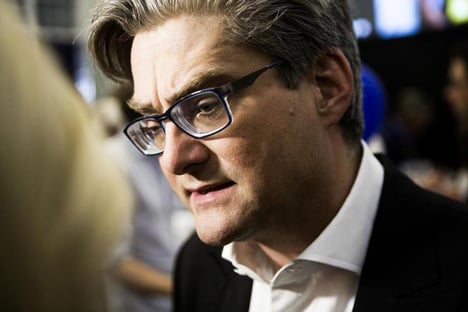 Søren Pind. Photo: Janus Engel/Polfoto
Anti-Semitism is alive and well within the United Nations apparatus, Denmark’s former development and immigration minister, Søren Pind, said in an interview on Tuesday.
Pind told Jyllands-Posten that the road to peace in the Middle East is blocked by anti-Semitism in the UN.
“It is my clear impression that there is an anti-Semitic sentiment within areas of the UN’s fora,” he told the newspaper.
“I don’t think one can doubt that when you look at the overall make-up of the UN or when you look at the composition of the Human Rights Council,” Pind added.
The Human Rights Council (HRC) consists of 47 Member States serving on rotating three-year terms. The HRC is currently made up of 11 Muslim-majority countries, including Indonesia, Kuwait, Pakistan, Saudi Arabia and the United Arab Emirates.
Pind also said that the UN General Assembly often criticises Israel and that when it comes to Israel, “the Arab world is completely set in its ways beforehand”.
Pind’s statements split the waters amongst his fellow MPs.
The Social Democrats’ foreign policy spokesman John Dyrby Paulsen told Jyllands-Posten Pind’s remarks were “cheap and un-nuanced”, while the Red-Green Alliance (Enhedslisten) said Pind was “completely wrong” to bring religion into it, saying that the current Gaza conflict was political in nature.
Denmark’s former foreign minister, Lene Espersen of the Conservatives, seemed to agree with Pind’s point if not his wording.
“I would have used a different formulation. It is correct that the Arabic countries sympathise with the Palestinians. But in the EU and the US, there is an opposing strong support for Israel’s right to react in order to safeguard its own security,” Espersen told Jyllands-Posten.
Søren Espersen of the Danish People’s Party found Pind’s criticism right on the mark, particularly when it comes to the HRC.
“Countries like Saudi Arabia and all sorts of gangster countries sit on [the council]. Muammar Qaddafi’s Libya was also the chairman for awhile. That says everything you need to know about what kind of absurd organisation this is, which only creates problems for peace,” he told Jyllands-Posten.
Pind said he supported current Foreign Minister Martin Lidegaard’s call for an independent observer corps in Gaza, but due to the UN’s “anti-Semitic sentiment”, he would rather see a team made up of observers from Denmark and its neighbours.
“I would prefer to see a Nordic initiative, because Nordic observers would certainly have an easier time working in that area,” he told Jyllands-Posten.