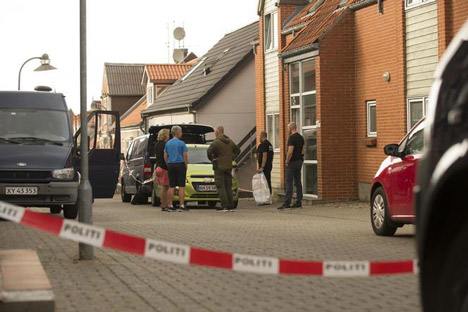 The scene of the crime in Lemvig. Photo: Brian Rasmussen/Polfoto
At an initial court appearance in Holstebro on Tuesday afternoon, a 15-year-old male suspect was officially charged with raping and killing 77-year-old Else Johannesen and then stealing her purse.
The 15-year-old will be held in remand until September 2nd.
“A case of this character requires full attention and quick police action. We are therefore very satisfied with the effective investigation that resulted in being able to present our suspect in court today,” Mid- and Western Jutland Police spokesman Klaus Arboe Rasmussen said in a press release.
The court appearance was held behind closed doors, but according to Ritzau the 15-year-old plead not guilty but admitted to violence that resulted in death.
The 15-year-old is reportedly from Lemvig, the same town as his alleged victim.
Johannesen was found dead in her flat by a social worker on Sunday morning.
The suspect was arrested on Monday afternoon, just hours after the owner of an online sex shop said he gave police the IP address used in a sex toy purchase carried out with Johannesen’s credit card.