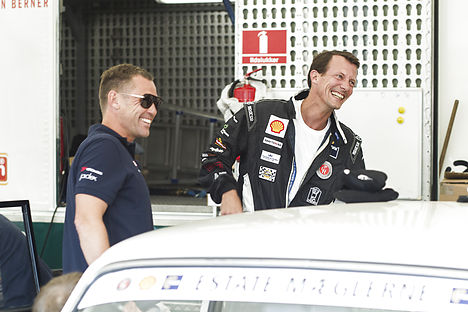 Prins Joachim (right) and Tom Kristensen won the Pro/Am race at the Copenhagen Historic Grand Prix 20014. Photo: Niels Ahlmann Olesen/Scanpix
Teamed up with Danish racing legend Tom Kristensen, Prince Joachim raced to victory on Sunday in the final race in the Copenhagen Historic Grand Prix's Royal Pro/Am division, in which professional drivers ride along with skilled amateurs.
Driving his 1965 Ford Lotus Cortina, Prince Joachim and Kristensen edged out the other racers at the street race in Bellahøj. Prince Joachim's 1965 Ford Lotus Cortina. Photo: Niels Ahlmann Olesen/Scanpix
Prior to the race, Prince Joachim told BT that it was an honour to race with Kristensen, a nine-time 24 Hours of Le Mans winner.
“It’s a very, very big deal and I have shared a car with Tom before. But I also wanted to do it with the other [drivers]. These are people who do this professionally. They know quite well how to get the best out of a car,” Prince Joachim said.
“And it is a smashing good time to know that one of the biggest names in the motorsports world is my co-driver,” he added.
Prince Joachim is a well-known motorsports enthusiast. He has competed in the Copenhagen Historic Grand Prix for several years and has a collection of race cars at Schackenborg Castle, the ownership of which the prince and his wife Princess Marie recently transferred to a new foundation.
Note: This article originally included the wrong date for the Copenhagen Historic Grand Prix, which took place August 2-3.