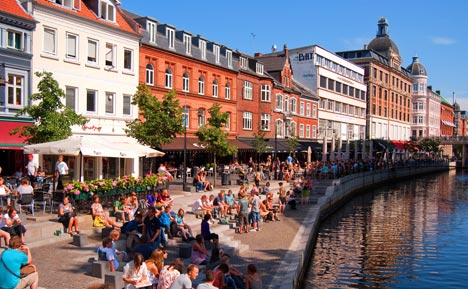 Plenty of time left to soak up the sun and warm in Aarhus and the rest of the country. Photo: Colourbox
This week may have provided a slight cool-down from the record-setting July heat, but that doesn’t mean that summer is already fading away.
Meteorology institute DMI has released its prognosis for August and it calls for continued high temperatures throughout the month, with daily highs reaching 23-28C. The occasional presence of cool fronts through the month may bring those temps down to the 20-23C range.
DMI said that a projected high-pressure front could move in mid-month and push the temperatures up over 30C.
As a whole, August temperatures should be between one and three degrees higher than average.
Final weather calculations from DMI on Friday showed that July 2014 tied July 1994 as the second warmest July on record with an average temperature of 19.5C. The hottest July was in 2006 when the average was 19.8C.
On Friday, the Danish Emergency Management Agency (Beredskabsstyrelsen – DEMA) reported that July set yet another weather-related record. But just as the record warm water temperatures were not good news for aquatic life, this record is not good for plants and trees.
Throughout the course of July, DEMA received 458 reports of wildfires. That is a sharp increase over the 286 fires reported last year and the 126 reported in 2012.
DEMA said that the 458 calls received doesn’t necessarily correlate with the number of wildfires, as some fires may have been called in more than once.