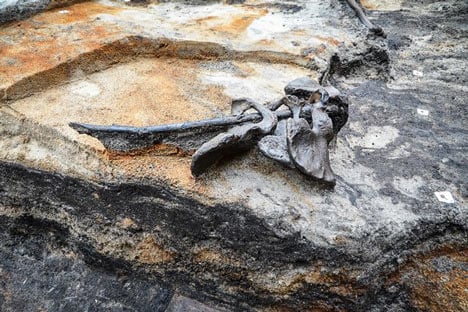 Four pelvis bones on a stick - you don't find that everyday. Photo: Peter Jensen/Aarhus University
It may not have been enough for Iron Age warriors to vanquish their foes. A new discovery in a Danish archaeology dig shows that the warriors also collected and mutilated their enemies’ remains.
As part of its ongoing excavation near the Alken Enge wetlands in eastern Jutland, a team of archaeologists from Aarhus University, Skanderborg Museum and Moesgaard Museum made a gruesome discovery this week.
“We have found a wooden stick bearing the pelvic bones of four different men,” Kähler Holst from Aarhus University, the project’s leader, said on the university’s website.
The team made a headline-grabbing discovery in 2012 when an excavation revealed the bones of an entire Iron Age army in a mass grave dating back about 2,000 years.
New discoveries this week shed additional light on the gruesome behaviour of Iron Age warriors. The excavation team said that the skeleton remains were used in what seems to have been a sort of holy ritual. Researchers believe that after six months of lying on the battlefield, the bones were stripped of remaining flesh and "brutally desecrated" before being thrown into what was once a large lake near Alken Enge.
“We are fairly sure that this was a religious act. It seems that this was a holy site for a pagan religion – a sacred grove – where the victorious conclusion of major battles was marked by the ritual presentation and destruction of the bones of the vanquished warriors,” Kähler Holst said.
A number of finds from the excavation are currently on display at Skanderborg Museum.
A close-up look at the four pelvis bones threaded onto a stick is available in the video below.