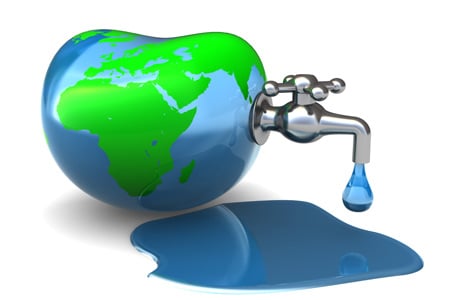 Photo: Colourbox
Newly-published research from Aarhus University warns that the world will face a severe water shortage by 2040 if new approaches to the generation of electricity are not adopted.
Two reports co-authored by Aarhus University professor Benjamin Sovacool sound an alarm about the world’s water usage, saying that without a paradigm shift in how we use water as an energy source we will run out of drinking water.
“We’ll have to decide where we spend our water in the future. Do we want to spend it on keeping the power plants going or as drinking water? We don’t have enough water to do both”, Sovacool said in an Aarhus University press release.
Speaking to The Local, Sovacool said continuing to use so much water for electricity would lead to major repercussions.
“If we continue to generate electricity using water-intensive cooling cycles as we do today, by 2040 there will be serious threats to water availability and quality across Asia, Europe, and the United States,” he said.
The research states that in most parts of the world, the biggest source of water consumption is the energy sector, as power plants require massive amounts of water for necessary cooling cycles. The reports studied water usage in the energy sectors of China, France, India and the US state of Texas and found that most power systems do not even keep track of their water usage.
“It’s a huge problem that the electricity sector does not even realise how much water it actually consumes. And together with the fact that we do not have unlimited water resources, it could lead to a serious crisis if nobody acts on it soon”, Sovacool said in the press release.
The researchers called for investments in wind and solar energy, the only energy systems that do not require cooling cycles. They also recommended improving energy efficiency and better monitoring of water usage in power plants.
Sovacool’s reports were coauthored by Paul Faeth, the director of energy, water and climate at CNA Corporation, a non-profit research and analysis organisation in Arlington, Virginia.