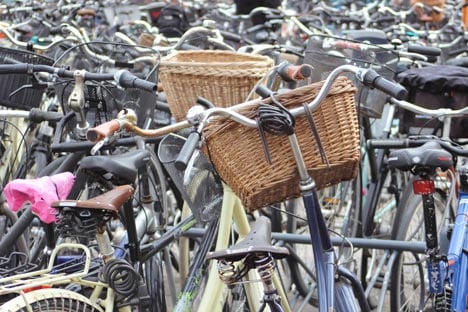 Photo: Colourbox
UPDATE, 5.49pm:
The managing director of Cykelstativet ApS told Danmarks Radio that the company will stop its illegal practice of removing bicycles parked in front of Copenhagen businesses.
"We have stopped our storefront clearings with immediate effect," Jones Malla told Danmarks Radio on Thursday afternoon.
ORIGINAL, 3.09pm:
A private company that has been removing bicycles improperly parked in front of Copenhagen businesses has been doing so illegally, Copenhagen Police said on Thursday.
The company Cykelstativet ApS came into the limelight a few weeks ago after a growing number of residents complained that the company had taken their bicycles and charged a 187.50 kroner ($34) fee to get them back.
Cykelstativet’s managing director, Jones Malla, has defended his company’s actions, arguing that it has been hired by Copenhagen businesses to keep their storefronts clear of bicycle clutter.
After Politiken newspaper highlighted Cykelstativet’s business model, many began questioning if what the company was doing was even legal.
On Thursday that answer came in the form of a press release from Copenhagen Police.
“Copenhagen Police has received many inquiries from residents about the legality of having their bicycles removed by the company Cykelstativet ApS from either the sidewalk or adjoining areas. The authority to remove bicycles that are parked in areas covered by the Road Traffic Act [færdselsloven, ed.] is given only to the police,” the press release read.
The police said that it is also illegal to remove bicycles from private property not covered by the Road Traffic Act.
Police spokeswoman Charlotte Møgelhøj rejected Malla’s argument that his company’s removal of bicycles was a business transaction between two private companies and not a police matter.
“It’s about how far away the bicycles are moved,” she told Danmarks Radio. “If they are on private property, you can move them to a bicycle rack. But taking them to a warehouse and then demanding money to get them back is something else altogether.”
Cykelstativet's financial backers have previously said that they would pull the plug on the company if the practice was deemed illegal.
“It should go without saying that we are not interested in owning shares in a company that violates the law,” co-owner Frederik Riskær Pedersen told TV2 News last week.