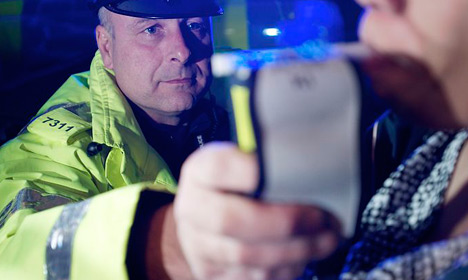 The captain (not pictured here) was still very drunk when police gave a sobriety test hours after the incident. Photo: West Midlands Police/WikiCommons
A tanker loaded with 2,100 tonnes of cement ran aground on the island of Læsø late on Tuesday night, and apparently the ship itself was not the only thing that was loaded.
According to Nordjyske, the Russian captain of the ship registered a blood alcohol level over twice the legal limit when North Jutland Police administered a breathalyzer at around 4am. And that was over five hours after the ship, the Cyprus-owned Cemfjord, ran aground.
Police say the ship was en route from Aalborg to England when things went wrong off the southwest coast of Læsø just before 11pm. The ship, however, did not call for assistance until much later.
“The ship ran aground at 10.41pm and we were notified at 1.47am. I imagine that they tried to come free on their own,” North Jutland Police spokesman Carsten Kjær told Ritzau.
Police arrested the captain and took him to Frederikshavn for processing.
Officials from the Admiral Danish Fleet (Søværnets Operative Kommando) said that there was no sign of leakage from the tanker, which as of Wednesday morning was still grounded. A tugboat will try to free the during the course of the day on Wednesday.