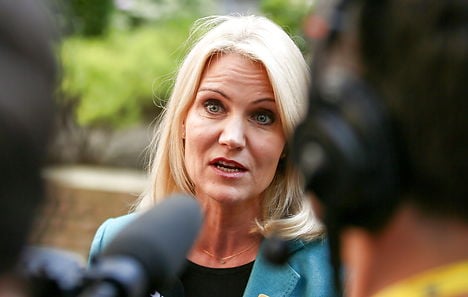 Photo: Julien Warnand/Scanpix
The social democratic leaders of the five Nordic nations wanted to send a unified message condemning Israel’s military action in Gaza. But the letter was missing one key name: Danish PM Helle Thorning-Schmidt.
Thorning-Schmidt, the Social Democrats’ chairman in Denmark and the only social democratic leader who is also the head of a national government, declined to sign on to the unified message.
Stefan Löfven of Sweden’s Social Democrats, Jonas Gahr Støre of Norway’s Labour Party, Árni Páll Árnason of Iceland’s Social Democratic Alliance and Antti Rinne of Finland’s Social Democrats all added their names to the letter, which “condemns Israel’s use of disproportionate violence” and calls on Israel to end its blockade of Gaza and occupation of the West Bank.
The message also calls on Israel to “stop its settlement policies which constitute an unlawful annexation of the occupied territories”.
Thorning-Schmidt is on holiday and did not comment, but a Social Democrat spokeswoman, Ane Halsboe-Jørgensen, told Politiken that the Danish government felt satisfied with a unified European message on the Gaza conflict that was agreed upon by the EU member states’ foreign ministers on July 22nd.
“The Danish government has sent a very clear message under the auspices of the EU and other places that we take the situation very seriously. We feel completely covered by the conclusions made within the EU,” Halsboe-Jørgensen said.
But the absence of Thorning-Schmidt’s name on the more strongly-worded Nordic message led to criticism from Denmark’s left wing.
“I do not understand why the Danish Social Democrats are not on board,” the former foreign minister, Holger Nielsen of the Socialist People’s Party, told Politiken.
“The four [Nordic] social democratic leaders’ message contains several elements that we have unsuccessfully suggested to the government,” Per Clausen of the Red-Green Alliance (Enhedslisten) told Politken. “It is embarrassing that the government has responding so passively in relation to Israel’s attacks on Gaza.”
On Monday, another demonstration in support of Gaza took place in Copenhagen, this time drawing up to 3,000 participants at the Town Hall Square. A similar demonstration on Friday resulted in the arrest of 16 individuals for illegally covering their faces at a demonstration and possession of powerful fireworks.