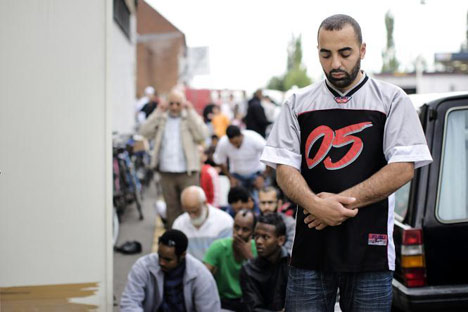 Danish Muslims pray in Copenhagen. File photo: Jens Panduro/POLFOTO
Denmark’s largest opposition party, Venstre, is calling for the nation to differentiate its immigration policies based on religion.
Venstre’s political spokeswoman Inger Støjberg wrote an op-ed published in Berlingske on Monday in which she said that it should be more difficult for non-Western immigrants with Muslim backgrounds to come to Denmark.
“It is not necessary to set the same requirements for everyone, because as a general rule there is a big difference in the ability and will to integrate between a Christian American or Swede and a Muslim Somali or Pakistani,” she wrote.
Støjberg said it was important to talk frankly about immigration issues.
“To say it directly, it is primarily Muslim immigrants who do not value democracy and freedom. In certain environments, they directly oppose it,” she wrote. “Too many non-Western immigrants with Muslim backgrounds do not want our freedom-orientated society model.”
Støjberg suggested that Denmark should adopt an immigration approach that makes it easier for Westerners and harder for Muslims.
“In the future we should make it easier for those who traditionally can and will integrate to come to Denmark, while we make it more difficult for those who don’t have the ability or the will,” she wrote.
Støjberg also pointed toward the incendiary remarks by an Aarhus-based imam as evidence that “too many Muslims in Denmark practise a medieval interpretation of the Koran and it prohibits them from being a part of normal Danish life.”
Her remarks quickly created a stir amongst the other political parties.
The anti-immigration Danish People’s Party (DF) warmly welcomed Venstre’s approach.
“If Venstre has now finally understood the need to differentiate between immigrants and limit non-Western immigration, then we are getting closer to each other,” DF’s Martin Henriksen wrote in a press release.
Fellow opposition party Conservative were not on board with Støjberg’s suggestion, however.
“For me as a conservative it is important to set requirements [for immigrants] but it is also important that the requirements are equal regardless of what country one comes from,” party spokesman Tom Behnke told Danmarks Radio.
The governing Social Democrats and Social Liberals (Radikale Venstre) both dismissed the idea of creating two sets of immigration rules.
“It doesn’t stand a chance on earth,” the Social Democrats’ Mette Reismann told DR. “You can’t discriminate people on the background of their home country or religion. It says that directly in our constitution, so it’s as simple as that.”
Støjberg’s message to Denmark's Muslims came on the first day of Eid al-Fitr, the holiday that celebrates the end of Ramadan.