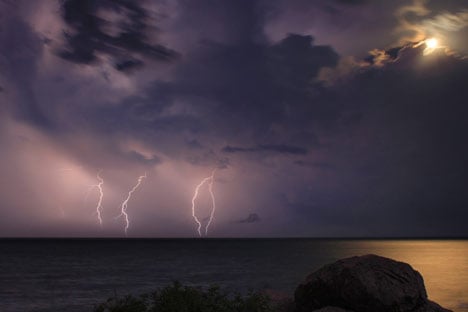 Photo: Colourbox
Sun and heat were replaced by rain, lightening and fog in many parts of Denmark on Sunday and Monday.
While the Copenhagen area remained mostly dry, areas of Jutland experienced heavy downpours on Sunday. According to meteorology institute DMI, the western Jutland town of Skjern received 28 millimetres of rain in just 30 minutes, while near Salling, 44 millimetres of rain fell over the course of an hour.
DMI estimates that there were around 10,000 lighting strikes nationwide on Sunday. That one-day total nearly matches the annual average of 10,700 lightning strikes.
DMI’s forecast for Monday calls for temperatures between 23-28C as the morning fog is replaced by partly sunny skies. The eastern part of the country could see some rain and possible thunderstorms.
The rest of the week calls for highs between 25-28C but the long stretch of unbroken sunshine appears to be over for awhile, with more clouds and rain forecast for most of the country through Saturday.