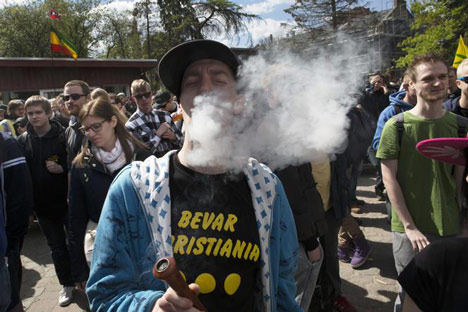 Photo: Klaus Holsting/Polfoto
The World Health Organization’s (WHO) call for the decriminalisation of drugs will be taken up by Danish politicians in the autumn.
In the WHO report, which focused on international HIV prevention, the UN agency encourages countries to stop criminalising the use of drugs.
“Countries should work toward developing policies and laws that decriminalise injection and other use of drugs and, thereby, reduce incarceration,” the report read.
The report’s recommendation, and Denmark’s overall approach to its national drug policy, will be on the political agenda when politicians return to Christiansborg following summer holiday.
“I can go as far today as to say that I think WHO’s message is in line with what has been a Social Democratic position,” Flemming Møller Mortensen, the health spokesman for the governing Social Democrats, told Information.
“I will take up a discussion with Parliament’s Health Committee [Sundhedsudvalget] after summer holiday and will recommend that the committee carry out a hearing,” he added.
The Social Democrats have had a very public split over drug policy. Copenhagen’s mayor Frank Jensen, the party’s vice chair, has vocally advocated for the legalisation of cannabis, while his party’s national leaders, including PM Helle Thorning-Schmidt, have repeatedly rejected his proposal.
See also: 'Denmark will definitely legalise weed'
Over in the camp of the left-wing Socialist People’s Party (SF), legal spokeswoman Karina Lorentzen said that Denmark’s current drug policies have failed.
“I can’t see how our current approach has helped at all. On the contrary, we have created a very lucrative market for organised criminals,” she told Information.
She pointed to Portugal’s success with decriminalising drugs. Since that country changed its drug policies in 2001, it has seen a sharp decrease in drug abuse.
“Those types of models apparently offer an effective approach, and I just think that we have reached the limits of what can be achieved by using police and punishment as the means to fight this,” she said.
On the other side of the political aisle, the Conservative party’s spokesman Tom Behnke said the party “was not resigned to decriminalisation”.
“There is a good reason that it is illegal, and that is because it is dangerous to be on drugs. On the other hand, we do need to admit that there are people who take these drugs so we need to try to respond to that. The important thing is to have a good treatment program, so we can help people break their addictions,” he told Information.
The Social Democrats’ Mortensen agreed that the health aspect of drug addiction should be given more weight.
“It is true that here in Denmark, the health part has been a bit secondary in relation to the legal framework, and that is not the right way to tackle this development if we want to improvement the health aspect,” he said.
According to the 2014 European Drug Report, the 35.6 percent of Danes who admit to having smoked cannabis in their lifetime is the highest proportion among European countries. Danes’ next drug of choice is amphetamines, with a lifetime prevalence of 6.6 percent, followed by cocaine at 5.2 percent.
In June 2012, Denmark passed legislation allowing for legal injection rooms. The one that opened in Copenhagen’s Vesterbro district in August 2012 has widely been viewed as a success and led to similar clinics opening in Odense and Aarhus. The Danish Health and Medicines Authority (Sundhedsstyrelsen) gave the injection rooms the lion’s share of the credit for the fact that drug-related deaths have reached their lowest level in nearly 20 years.