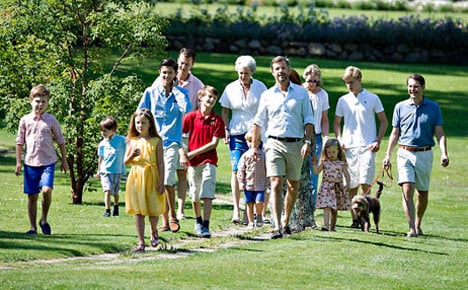 The royals make their way toward an army of photographers. Photo: Henning Bagger/Scanpix
The entire Danish Royal Family made their annual group appearance at Gråsten Palace on Thursday in front of an eager press corps.
Some 60 photographers were on hand trying to capture the perfect shot of Queen Margrethe and Prince Consort Henrik’s extended flock, which includes their two children, Crown Prince Frederik and Prince Joachim, and eight grandchildren.
Decked out in casual summer clothes befitting the warm July weather, the royals were only out in front of the press for a few minutes before retreating back to the palace.
See the gallery: Danish royals pose for family photos
Photographer Søren Steffen told Danmarks Radio that he knew exactly who to aim his camera at during the limited available time.
“I am particularly focused on Mary and Isabella, as well as all the children in general,” he said, referring to the crown princess and her eldest daughter.
See a collection of photos from Thursday’s appearance at Gråsten Palace here.