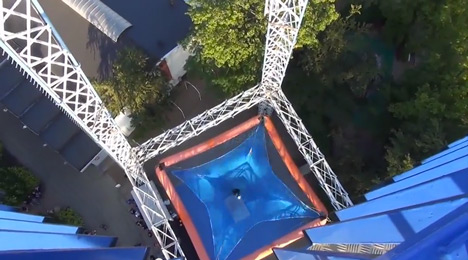 The view down. Screenshot: Theme Park Review/YouTube
If you’re scared of heights, you might want to stop reading now. Or at least skip the video below.
But the rest of you may appreciate the fact that a video of the Sky Tower attraction at Aarhus amusement park Tivoli Friheden has caught the attention of thrill seekers worldwide.
The people behind the popular website Theme Park Review posted a video of their experience at the Sky Tower, calling it “one of the most CRAZY rides on the planet!”.
The video was quickly picked up by Reddit, Gizmodo, 9Gag, Perez Hilton and various other news and aggregator sites across the globe. It was also featured on the Comedy Central TV show @Midnight, in which none other than comedic legend Weird Al Yankovic shared his thoughts on the Aarhus ride.
Since it was posted to YouTube on July 17th, the video has racked up nearly two million views.
And no wonder. The Sky Tower takes brave souls to a platform 40 metres above ground and drops them down to a net 30 metres below at a speed of 90 km/h. Oh yeah, did we mention that's without a wire? Yep, a pure free fall. If you think that sounds scary, you're not alone. One of the Theme Park Review hosts said "I'm gonna die" before trying the ride. Spoiler: he didn't.
The experience was enough for the Americans behind Theme Park Review to label their Sky Tower video the “world’s most crazy terrifying free fall drop ride EVER.”
See it here: