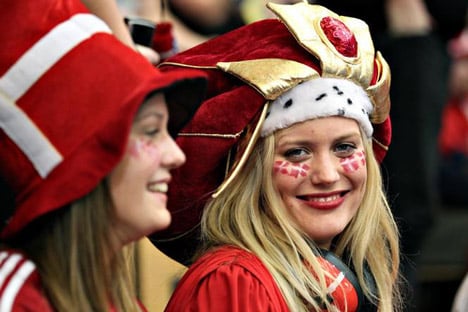 Photo: Lars Krabbe/Polfoto
Denmark is the ugly stepsister of Scandinavia.
That is, if a recent survey of Nordic singles is to be believed.
The survey asked 5,000 singles in the Nordic nations who among their neighbours was most attractive. Swedes won – by a long shot. The majority of Danes, Norwegians and Finns said that Swedish men and women were aesthetically superior. Danes were seen as the least attractive among their Scandinavian neighbours in Sweden and Norway, but topped their more distant cousins, the Finns.
Countries were not allowed to vote for themselves – leaving the nations' levels of narcissism a mystery. However, it was still clear who won the beauty pageant.
An entire 61 percent of Danish singles, both men and women, said Swedish women are the most beautiful in the Nordics. Swedes are also desirable amongst Norwegians, with 63 percent of Norwegian women preferring Swedish men and 70 percent of Norwegian women saying their Swedish rivals were the most beautiful women of the north.
Sixty percent of Danish men agreed that Swedes were the most beautiful overall – although they were less inclined to select Swedish men, with only 42 percent ranking them at the top.
Swedes themselves gave the top beauty prize to Norwegians, with 69 percent and 66 percent saying Norwegian women and men were most attractive, respectively. Swedes were not particularly fond of the Danes, with only 25 percent ranking men at the top and 20 percent favouring the women.
Danes could find consolation in the fact that it’s not like the Swedes don’t find Danes hot. They just think that their own people are better looking.
“There are attractive people in all of the countries, just more in Sweden,” Emma Wiberg told The Local Sweden.
Magnus Barkman Petersen, a graphic designer in Copenhagen, agreed with the overall attractiveness of the Nordic people but gave the ultimate nod to his countrymen.
“Really, I think that all of the Nordic countries have really beautiful people. But Danish people are a bit more trendy than the Swedes. I generally think Danes are very good looking, but it is more than just the looks you are born with. It’s also how you dress and carry yourself, and your general attitude. When you factor all of that in, I think the Danes are better looking than the Swedes,” he told The Local Denmark.
Karen Melchior, meanwhile, agreed with the survey's findings in a diplomatic manner befitting a former candidate for the European Parliament.
“Swedes and Norwegians are probably in better shape in general and hence fitter than Danes,” she said.
Finland came last in beauty class, with Sweden, Norway, and Denmark giving the nation the absolute lowest marks. Only about ten percent of Swedes thought the Finns were worth flaunting.
The survey was a collaborative effort by Match.com and Hotels.com, and surveyed singles registered on Match.com in Sweden, Norway, Denmark, and Finland. Nomadic Nordic nation Iceland was excluded due to lacking a national Match.com site.