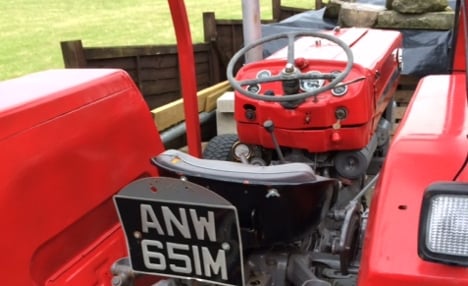 The vintage tractor ready to travel from UK to North Norway. Photo: Peter Matheson
A British man is set next month to drive from Scotland to the northern tip of Norway on a vintage tractor to raise money for a cancer charity.
Peter Matheson, 50, will make the 8,000-mile round trip to raise over £100,000 (943,000 kroner, $170,260) in memory of a young friend who passed away last year. Tom Bowbridge died aged 19 of an aggressive stomach cancer in October 2013.
Matheson, a former policeman and originally from Oxford, sets off on Saturday August 9th from John o' Groats in the Scottish Highlands. He hopes to raise vital funds for the Tom Bowbridge Foundation, set up after the teenager's passing.
Matheson will make the journey on a vintage tractor he bought on eBay for £7,000 (66,000 kroner, $11,900). The 1972 Massey Ferguson 135 is 42 years old and – although eight years younger than its owner – it has no power steering, just three gears, and is open to the elements. Her top speed is a 'nippy' 24km/h.
The tractor will tow a 28-foot caravan Matheson also bought which will provide accommodation for the intrepid explorer and his dog, Amber, along the way.

The 1972 Massey Ferguson bought on eBay. Photo: Peter Matheson
But why a tractor? The idea for the trip, now called "The Tractor Bumble", came to Matheson only two weeks ago in a eureka moment.
"Many people have asked me if this trip is my mid-life crisis, but I am simply one of life's nomads. I have a wanderer's spirit," Matheson told The Local. "The idea of seeing one view forevermore out of my window saddens me. Life is for living, exploring and having fun. I am not yet old enough for an armchair, pipe and slippers."
He believes the tractor will create a lot of attention with people everywhere. He said: "I took the tractor for her maiden test-drive on Monday in Inverness, Scotland. Many people just came and talked to me out of nowhere. They wanted photographs and kids were waving. It was surreal!"
The estimated four-month expedition will see him travel from John o' Groats to Land's End, before passing through France, Germany and Scandinavia, and then back to the UK.
The Local asked, "Why ride through Denmark?” Matheson said: "I have an old girlfriend who lived in Copenhagen and I want to pass through the city to rekindle fond memories of our time together.”
Of his ultimate destination at the tip of Norway, Matheson said it was to fulfill one of his life’s ambitions of seeing the Northern Lights.
“I believe people are lights in our lives and although Tom's light may have faded, the Northern Lights resurrect my memory of him,” he said. Peter Matheson. Photo: Submitted
The former policeman hopes to arrive in Scandinavia around mid-September and expects to be back in the UK in December.
Along the way, Matheson hopes to meet many people, connect with different cultures, and raise money for the Tom Bowbridge Foundation.
"This trip isn't about me. It is about helping causes and putting smiles on other people's faces. A small idea has ballooned into something of a scale I never could have imagined," said Matheson.
For more information about Matheson's journey or to donate to the Tom Bowbridge Foundation, visit www.spanglefish.com/TractorBumble.

NORWAY
AFTER LOCKDOWN: Are Denmark’s and Norway’s restrictions now like Sweden’s?
Url copied to clipboard!