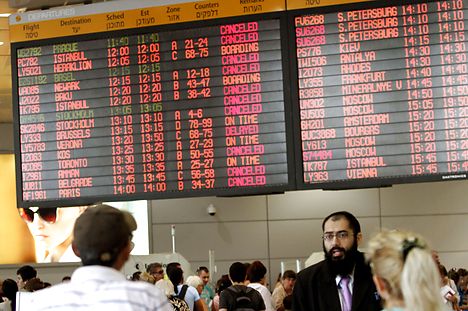 A departure time flight board displays various cancellations at Ben Gurion International airport on Wednesday. Photo: Gil Cohen-Magen/AFP/Scanpix
Hundreds of airline passengers trying to return to Copenhagen and Stockholm are still stranded in Tel Aviv.
The airlines SAS and Norwegian both temporarily suspended all flights from Copenhagen to Tel Aviv after a rocket landed near the Ben Gurion International Airport on Tuesday. The airlines say that  flights will likely be grounded on Thursday as well.
Plans to rebook passengers from Tel Aviv onto other flights fell through on Wednesday, as flight agencies continue to ground planes to and from Israel.
"We have been unable to rebook through other agencies," Charlotte Holmberg Jacobsson, press manager for Norwegian, told Swedish news agency TT on Wednesday evening.
"And now we also think that it is all too insecure to book with other companies, since it is unclear if it is even safe to fly. We're following the situation minute by minute."
SAS’s cancellation of flights out of Copenhagen and Stockholm has affected just over 300 passengers, spokeswoman Trine Kromann-Mikkelsen said.
Just over 100 passengers booked on a Norwegian flight to Stockholm were stuck in Tel Aviv on Wednesday. Another 186 Norwegian passengers are due to fly back to Copenhagen on Friday.
The status of Friday's flight, as well as an SAS flight scheduled to leave Copenhagen for Tel Aviv at 10.50pm on Thursday, was uncertain on Wednesday evening.
A rocket struck near Ben Gurion Airport in Israel on Tuesday, prompting SAS and several other airlines to cancel all flights to and from the airport. Israeli authorities stated that it was safe to land in Tel Aviv, but many international carriers, including European airlines Lufthansa and Alitalia, have yet to resume flights.