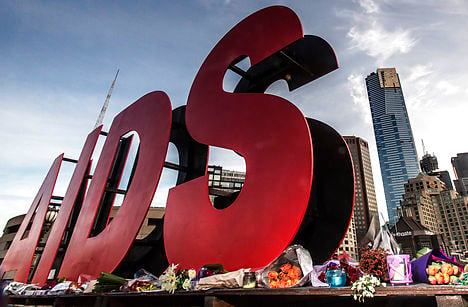 Flowers were laid at the base of a large sign for the 20th International AIDS Conference in Melbourne in tribute to researchers killed on Malaysia Airlines flight MH17. Photo: Mark Dadswell/Scanpix
A team of researchers at Aarhus University presented breakthrough HIV results at the 20th International Aids Conference in Melbourne, Australia on Tuesday.
In a pilot study, the Danish researchers were able to successfully expose and activate hidden HIV cells using anti-cancer drugs.
A team led by Ole Schmeltz Søgaard conducted a study on six HIV-positive patients and discovered that the cancer drug romidepsin could be successfully used to force HIV into the bloodstream, where it could then be taken on by the body’s immune system.
The discovery has been dubbed the ‘kick and kill’ method and is being praised as the most important advance in Aids research presented at the Melbourne conference.
“Ole’s data has for the first time shown we are able to shock the virus out of its hiding place. I think actually it is the single most important advance of this meeting and it's going to have a huge impact in future,” Steven Deeks, a professor of medicine and the University of California, said at the conference according to the Sydney Morning Herald.
In Søgaard’s study, five of the six patients treated with romidepsin had the HIV virus increase to a measurable level. By activating the HIV cells, it sets the stage for the patients’ T-cells to attack the virus. While the patients in the study did not destroy the virus, a new study by the Aarhus team will combine the ‘kick and kill’ technique with an experimental HIV vaccine to try to generate an immune response potent enough to kill the virus.
Søgaard cautioned that HIV hiding in “reservoir” cells appeared to be resistant to the treatment.
“What this tells us is that we can activate cells, we can induce the release of viral particles into the blood of the patients but this may not be enough to actually make a difference on the size of the reservoir,” he said in Melbourne.
Deeks told the conference that despite Søgaard’s revolutionary technique, a cure for Aids is not around the corner.
“A cure which is applicable everywhere around the world? My opinion is that it will take many, many years,” he said.
Despite the enthusiasm about Søgaard's research, the atmosphere at the International Aids Conference was downbeat. At least six people aboard the Malaysia Airlines flight that was shot down in Ukraine were on their way to the event, including Joep Lange, a leading force in the field of Aids research.