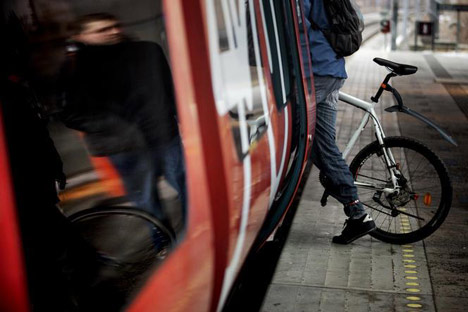 Photo: Lærke Posselt/Polfoto
Denmark is the best country in Europe for commuting by bike and rail.
A new report from the EU Commission ranks Denmark’s rail system as the best in Europe for combining bicycle and rail travel.
In seven years, the number of passengers who travelled on Danish trains with their bikes rose from two million annual trips to nine million.
Up until 2007, national rail operator DSB charged passengers who brought their bikes on board an add-on fee that amounted to slightly under the cost of a normal ticket. A DSB spokesman said the decision to drop that charge on the Copenhagen area’s S-train system is a key reason for Denmark’s commuting success.
“The number of passengers bringing their bike has been increasing steadily for several years,” DSB spokesman Christian Linnelyst told The Local. “In addition, our customers have become more accustomed to taking the train, so there is also an increase in trips without their bikes.”
The Commission report not only pointed to Denmark as the best place to combine bike and rail travel, it also revealed that overall train ridership has increased more in Denmark than in any other European country.
In 2012, Danes’ train travel increased by 15 percent over 2010.
“Societal developments have increased the desire to take the train, particularly in Copenhagen where statistics show that residents spend millions of hours stuck in traffic on the roads,” Linnelyst told Politiken. “Most people who have driven in Copenhagen have experienced being stuck in traffic and that is clearly a motivation to take the train.”
The increase in train passengers – and their bikes – is not without its problems, however. Trains going to and from Copenhagen in rush hour are often so packed with bikes that it creates a chaotic and cramped commute. But DSB has recently increased its capacity for accommodating bicycles.
“We recently added 104 cars to the S-train system, so the capacity for bicycles has doubled,” Linnelyst told The Local. “We know it has been chaotic at times, but now we have done something to make it better. We have also improved signage at the stations and made the boarding process smoother for those commuting with bikes.”
But with more and more people moving to the capital area, the number of train passengers is likely to continually increase.
“We need to be constantly aware of the demand,” Linnelyst told The Local. “We can’t say that no train is overloaded, that can still happen in the peak hours, so we need to be sure to adjust our capacity all the time so our customers can get on the train when they want.”