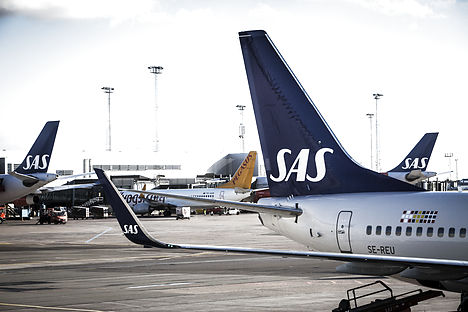 SAS said it would reassess the situation on Wednesday. Photo: Jeppe Bjørn Vejlø/Scanpix
The airlines SAS and Norwegian have both temporarily suspended all flights from Copenhagen to Tel Aviv after a rocket landed near the Ben Gurion International Airport earlier on Tuesday.
“We have chosen to cancel our two departures after reports of an attack near the airport in Tel Aviv,” SAS spokeswoman Trine Kromann-Mikkelsen told Ritzau.
SAS cancelled Tuesday evening and Wednesday morning departures and said it would reassess the situation on Wednesday before deciding whether to resume flights to Tel Aviv.
Norwegian has also put a halt on flying to Tel Aviv.
“We have received information that the situation in Tel Aviv has escalated. To protect our passengers and employees, we have decided to halt all flights for now,” Norwegian spokeswoman Charlotte Holmbergh told Ritzau.
Both airlines also cancelled departures out of Stockholm and Oslo.
Following the rocket report, the US Federal Aviation Administration also barred American airline carriers from flying in and out of Tel Aviv for 24 hours, after which time the American authorities said they would release additional information.
Even before the FAA’s decision, the Washington Post reported that several US airlines had cancelled flights to Tel Aviv on Tuesday.
Alitalia, Air France, Air Canada and Lufthansa have also all cancelled flights to the Israeli city.