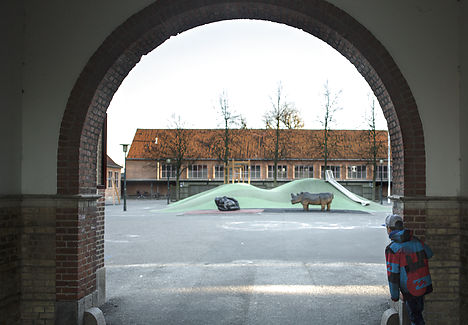 Whether in the schoolyard or elsewhere, an increasing number of Danes seem to be taking matters into their own hands. Photo: Niels Ahlmann Olesen/Scanpix
Taking matters into one’s own hands appears to be a growing trend in Denmark.
A recent survey conducted for the newspaper Kristeligt Dagblad revealed that nearly half of all Danes think that vigilantism is acceptable under certain circumstances, and eight percent reported that they themselves had taken the law directly into their own hands.
The same newspaper also reported on Monday that an increasing number of Danish parents are directly confronting schoolchildren who tease or bully their own kids rather than reporting those incidents to school officials.
Jørgen Dalberg-Larsen, professor emeritus at Aarhus University’s Department of Law, said that there is a growing opinion amongst Danes that the police aren’t always able to help them.
“It is precisely when people think that the law has failed that vigilantism is typically carried out,” he told Kristeligt Dagblad.
The same dynamic can be seen when parents confront children directly rather than approach teachers or school leaders.
“Vigilantism from parents who circumvent the system and go directly after kids that they feel are harassing their own children is unfortunately become more widespread,” Kenneth Christoffersen, the school leader at Hyltebjerg Skole in the Copenhagen district of Vanløse, told Kristeligt Dagblad. “I see it as a lack of trust in the school, but also part of a general trend in which parents have become more overprotective of their children.”
Claus Hjortdal, the chairman of the Danish Association of School Leaders (Skolelederforeningen), said that although he doesn’t see the problem as widespread, the phenomenon of parents directly confronting other children is increasing.
“It is a development that has particularly grown over the past couple of years, and it’s true enough that it has to do with a lack of trust in the schools from the parents’ side, but there is also a one-sided belief in what one’s own child says,” Hjortdal told Kristeligt Dagblad. “For many, children are the proof that you have succeeded as a family and therefore they get a lot of focus.”
In Kristeligt Dagblad’s poll, 46 percent of respondents thought it was acceptable to take matters into one’s own hands, while 44 percent did not.