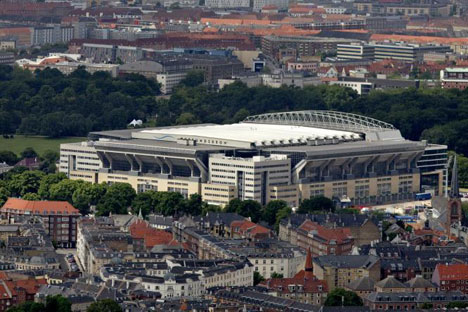 Photo: POLFOTO
The home of Denmark’s national football team has a new name.
The Østerbro stadium that was until today known simply as Parken is now Telia Parken.
The stadium, which is also the home of Superliga club FC Copenhagen, was officially rebranded with the Stockholm-based phone company’s name on Thursday.
Telia’s CEO, Søren Abildgaard, announced the name change in a press release.
“We are naturally proud of the deal with Parken, and it has been our goal from the beginning to improve the experiences by, among other things, giving guests the opportunity to be online,” he said. “The name signifies the new digital opportunities in Parken.”
As part of the rebranding, Telia Parken will offer free wifi throughout the stadium.
But that might not be enough to please fans. In an online poll, 72 percent of Berlingske readers said that the stadium should maintain the sponsor-free name of Parken.
In addition to hosting football matches, the stadium has also been the site of numerous concerts ranging from Pink Floyd to Lady Gaga.