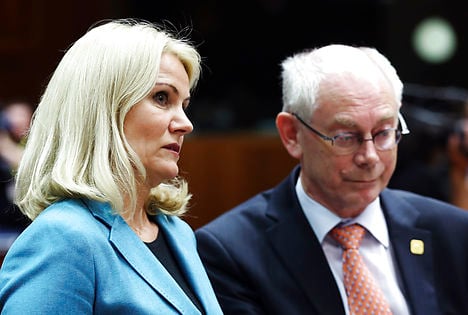 European leaders on Wednesday were not able to reach a consensus on filling two high-level appointments.

Heading into Wednesday's meeting in Brussels, all the focus was on who would be named as the next European Council president and the High Representative for Foreign Affairs. Danish PM Helle Thorning-Schmidt is considered a frontrunner for the Council job, while Italy is pushing its foreign minister, Federica Mogherini, as Catherine Ashton's replacement as the EU's head of foreign policy.

Even before the meeting got underway, European leaders including German Chancellor Angela Merkel cast doubt on any decisions being made on Wednesday. Although talks were still officially continuing at the time this story was filed, reports out of Brussels indicated that a decision on the top job appointments would be pushed back until a meeting on August 28.

#EUtopjobs @euHvR has given up trying to get a deal on anyone. back end august – top source #fiasco

Upon her arrival in Brussels on Wednesday, Thorning-Schmidt once again downplayed her chances of being named Herman Van Rompuy's successor as Council president.

"I am not a candidate. I have nothing further to add to that," she told assembled press.

For more on the EU meeting in Brussels, check out The Local Italy's live blog.