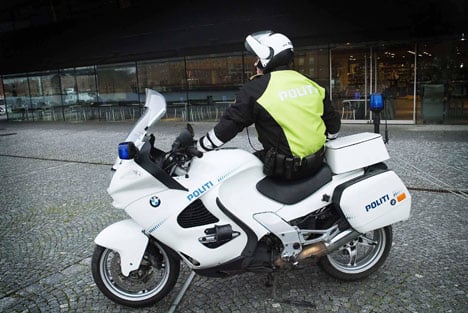 The chairman of the police union strongly condemned the alleged behaviour. Photo: www.politi.dk
Two Danish police officers are suspected of ticketing tourists and pocketing the money for themselves.
Danmarks Radio reported on Tuesday that two officers have been charged by the Independent Police Complaints Authority (Den Uafhængige Politiklagemyndighed – DUP) for five counts of accepting cash payments for speeding fines and using the money to line their own pockets.
Danish police officers by law can demand cash payments from foreigners who have violated traffic laws. But in at least five instances, the two officers in question are alleged to have kept the cash for themselves.
“We have compiled five instances in total for the two officers – two for one of them and three for the other – in which we believe there are grounds to charge them,” DUP’s Kristian Palmann Jensen told DR.
There are an additional seven cases in which tourists have reported suspicions that the ticketing officer kept the payments.
“This is unusual for us and that is why we have immediately moved forward with arrests. These are very serious cases that do not happen every day,” Jensen continued.
Claus Oxfeldt, the chairman of the Danish Police Union (Politiforbundet), called the allegations “shocking”.
“If it is true that they have filled their own pockets with the money, it is simply so shocking, so un-Danish and so wrong that it should naturally have the consequence that they can no longer work for the police,” Oxfeldt told DR.
Contacted by The Local via Twitter, Oxfeldt declined to say where in the country the officers in question worked.