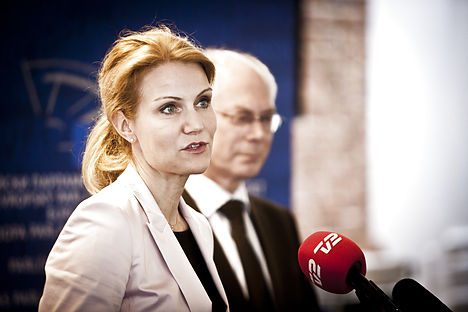 The future and current EU Council presidents? Photo: Asger Ladefoged/Scanpix
A tweet from EU Commission Vice President Neelie Kroes has reignited speculation about Helle Thorning-Schmidt’s chances of being picked for a top EU post.
The Danish PM has long been rumoured to be a top candidate to replace Herman Van Rompuy as the European Council president.
On Monday, Thorning-Schmidt received a high-profile endorsement from Kroes, one of seven EU commission vice presidents under outgoing president José Manuel Barroso.

“I am going on record saying that Helle Thorning-Schmidt would make a great successor to Herman Van Rompuy as president of the European Council,” Kroes tweeted.
SEE ALSO: Is Danish PM qualified for European top job?
Although Thorning-Schmidt has repeatedly said that she is not interested in a top EU post, her name has been circulated for months. After Jean-Claude Jüncker was appointed to replace Barroso, most analysts pointed to Thorning-Schmidt getting the nod to fill Van Rompuy’s post when he steps down at the end of the year.
It’s thought that Britain favours her for the post, while France would rather not have a non-euro country fill the position. Reuters reported last week however that France may be willing to support Thorning-Schmidt in exchange for Pierre Moscovici receiving the economic and monetary affairs portfolio.
EU leaders will meet on Wednesday and it is expected that candidates for as many as three top posts will be announced.