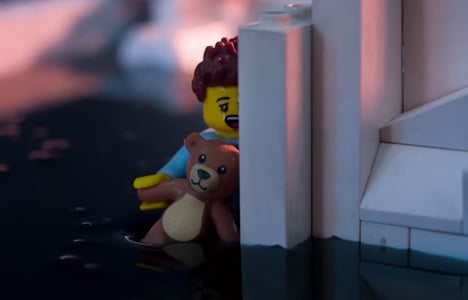 The new video features Lego people and animals drowning in oil. Screenshot: Greenpeace/YouTube
Greenpeace is continuing to pressure Danish toy giant Lego to end its partnership with oil and gas company Shell.
Following the action of Greenpeace activists who assembled a protest scene with Lego figures at the Legoland amusement park in Billund, Greenpeace has now released a video telling Lego that its Shell partnership is “not awesome”.
Playing off the Tegan and Sara song Everything is Awesome from the soundtrack to The Lego Movie, Greenpeace’s video shows an elaborate Lego universe being slowly drowned in oil.
In the video description, Greenpeace has kind words for Lego but attacks the company’s partnership with Shell.
“We love Lego. You love Lego. Everyone loves Lego,” the description reads. “But when Lego’s halo effect is being used to sell propaganda to children, especially by an unethical corporation who are busy destroying the natural world our children will inherit, we have to do something.”
The video encourages viewers to sign a petition urging Lego to stop working with Shell. As of Thursday morning, the petition was approaching 325,000 signatures.
Lego has previously said that it has no plans to end the Shell partnership and that the company feels like it is being used “as a tool” in a dispute between Greenpeace and Shell.
See the video below: