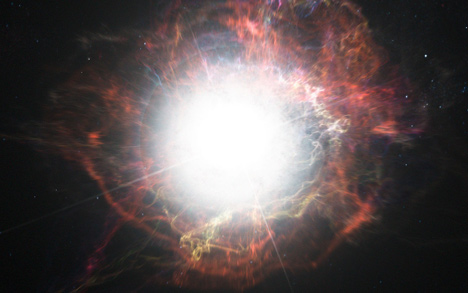 An artist’s impression shows dust forming in the environment around a supernova explosion. Photo: ESO/M. Kornmesser
Danish researchers may have cracked a great astronomical mystery: where does live-forming cosmic dust come from?
A group of astronomers led by researchers at the Aarhus University and the Niels Bohr Institute at the University of Copenhagen successfully witnessed the formation of stardust following a supernova explosion.
Astronomers have long believed that supernovae may be the source of cosmic dust, but have been unable to pinpoint how the dust grains grow and how they survive the violent supernovae explosions. The Danish-led team has now released findings that for the first time shed light on the dust’s formation.
Using the European Southern Observatory’s Very Large Telescope in Chile, the researchers observed a supernova nine times following its explosion in 2010 and a tenth time two and a half years later.
“By combining the data from the nine early sets of observations, we were able to make the first direct measurements of how the dust around a supernova absorbs the different colours of light,” project leader Christa Gall from Aarhus University said in a press release. “This allowed us to find out more about the dust than had been possible before.”
The researchers concluded that cosmic dust is created in a two-stage process, beginning soon after the violent explosion and continuing for years afterwards. Gall said that the first step is a smaller explosion in which the star releases hydrogen, helium and carbon. This creates a gas cloud that sits like a shell around the star. Within that cool and dense shell-like environment, the dust grains are able to grow.
“When the star explodes, the shockwave hits the dense gas cloud like a brick wall. It is all in gas form and incredibly hot, but when the eruption hits the ‘wall’ the gas gets compressed and cools down to about 2,000 degrees,” Gall explained. “At this temperature and density elements can nucleate and form solid particles. We measured dust grains as large as around one micron (a thousandth of a millimetre), which is large for cosmic dust grains. They are so large that they can survive their onward journey out into the galaxy.”
The grains discovered by the team are considered large by cosmic dust standards, which the researchers think is key to surviving the supernova explosion.
“Our detection of large grains soon after the supernova explosion means that there must be a fast and efficient way to create them,” Jens Hjorth from the Niels Bohr Institute said. “We really don’t know exactly how this happens.”
Hjorth said that the supernova observed by the international team of researchers was ten times brighter than the average supernova and that the exploding star was more than 40 times the size of the sun.
By observing the supernova several hundred days after the initial explosion, the researchers found that a second and accelerated stage of dust formation occurs.
“Previously, astronomers have seen plenty of dust in supernova remnants left over after the explosions. But they also only found evidence for small amounts of dust actually being created in the supernova explosions. These remarkable new observations explain how this apparent contradiction can be resolved,” Gall said.
The team’s full findings were published on Tuesday in the science journal Nature.