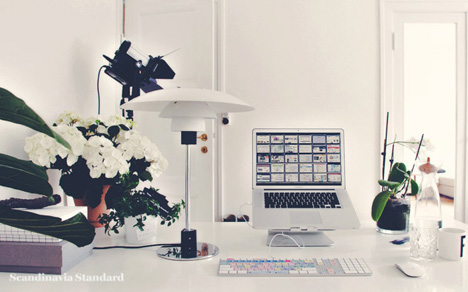 Photo: Freya McOmish, Scandinavia Standard
When we made the choice to write about culture in Denmark on Scandinavia Standard, neither myself nor my co-founder realized what proportion of our work would be focused on Danish design. As it turns out, you can’t really explain Danish culture without design; its effects are everywhere, from city planning to interior design to fashion.
We’re not going to cover all of that (you’re welcome) but a brief historical overview is a good start to understanding the world’s love affair with this tiny country’s take on design.
GALLERY: Scandi Six | Danish design pioneers
While we could start with the amazing engineering of Viking ships as early as 800 A.D, we’re not writing a dissertation here. So we’ll begin instead at the dawn of the 20th Century with Thorvald Bindesbøll, a man considered the grandfather of Danish design.  His most lasting achievement, the Carlsberg logo, hasn’t changed since it was adopted in 1904.
Early graphic artistry aside, Bindesbøll was a trained architect who is best known for his ceramic creations. Ornate and drawing inspiration from Japanese art, it may be difficult to visually connect Bindesbøll’s work with the streamlined minimalism associated with Danish design today. It was his reputation as a multi-talented designer – along with his use of organic shapes – that first brought Denmark to the global design forefront.
While a steady trickle of designers are highly notable from Bindesbøll until World War II, it is the post-war period that has produced the designers for which Denmark is now famous.  This influx of iconic design included furniture, architecture, ceramics, lighting and more.
Drawing from the Bauhaus school of German design, Danish designers focused on combining modernist functionalism with a sleek aesthetic. This group of designers paved the way for the breadth of design we see representing Denmark and Scandinavia today.
Let’s explore a few of the big names and the iconic items they produced:
GALLERY: Scandi Six | Danish design pioneers
Today, Danish design is synonymous with high-quality and minimalism. Still ahead of its time, Danish designers, such as architect Bjarke Ingels, are designing not only in Denmark but worldwide. While the thread that connects them goes back much further than 1945 and the regions it pulls together are wider than just Denmark, we continue to celebrate Danish design for the beauty, use and innovation it brings to us.
Scandinavia Standard is a website and lifestyle brand providing content on design, culture and local business in the Scandinavian capitals for English-speaking residents and travelers, as well as those interested in the Scandinavian aesthetic internationally. Read more at: www.scandinaviastandard.com.