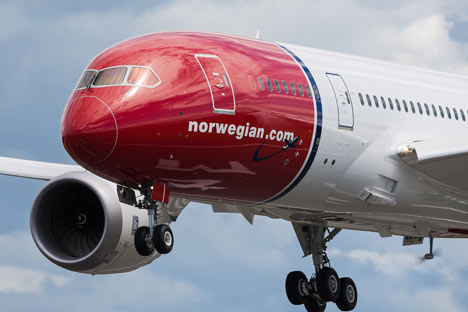 The new direct flight to Bangkok will begin on October 30. Photo: Norwegian
Beginning in October, it will be possible to fly directly from Copenhagen to Bangkok on low-cost airline Norwegian, the company announced today.
“I’m very pleased that we can offer Danes a direct flight with us between Copenhagen and Bangkok,” the airline’s CEO Bjørn Kjos said in a statement. “Our long-distance flights from Denmark have been very well received, showing that Danes want to fly cheaply and comfortably to overseas destinations.”
The Bangkok route will join Norwegian’s direct offerings from Copenhagen to the US destinations of New York, Los Angeles and Fort Lauderdale. The airline currently flies directly to Bangkok from both Oslo and Stockholm.
Norwegian’s press release stated that ticket prices for the direct flight to Bangkok would start at 1,599 kroner ($292) one-way. The flight will only be available on Tuesdays and Sundays.
A spot-check on flight booking service Momondo on Wednesday showed that flying to Bangkok with Norwegian on October 30 and returning two weeks later would cost 3,152 kroner for a round-trip, while a roundtrip with Thai Airways for the same dates would cost 5,472.
It wasn’t possible to find prices for the same dates with SAS, the only other airline offering a direct flight from Copenhagen to Bangkok, but a flight leaving on August 30 and returning two weeks later would cost 5,236 through Momondo.