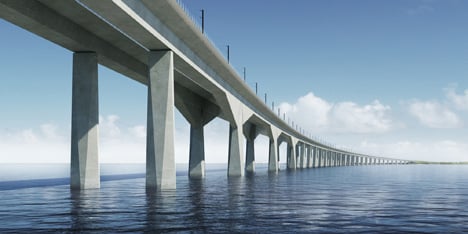 The Danish Road Directorate's rendering of the new Storstrøm Bridge. Photo: Vejdirektoratet
The EU will pump 112 million kroner ($20.4 million) into the design phase of the new Storstrøm Bridge.
The EU Commission on Tuesday approved the funding as part of its EU-wide infrastructure plan TEN-T aimed at better connecting member states.
The 112 million kroner will cover roughly half of all estimated costs during the project’s design phase, which is scheduled to be completed by 2015.
The new Storstrøm Bridge will replace the current 77-year-old bridge, which had to be shut down to rail traffic last year due to structural damage. The construction of the new bridge is expected to cost four billion kroner and be completed by 2021.
The bridge connects the islands of Zealand and Falster and is seen as an integral part of the Fehmarn Belt Fixed Link plans. The Fixed Link will connect Falster’s adjoining island of Lolland with the German island of Fehmarn. That project is also expected to be completed in 2021 and will be the largest immersed tunnel in the world when finished.
“The Storstrøm Bridge is a very important piece of the Fehmarn Belt project, which will benefit Denmark, Germany and all of Northern Europe,” the transport minister, Magnus Heunicke, said. “On a local level, the new Storstrøm Bridge will naturally be a huge win. The project will generate economic growth and jobs here and now and in the future it will greatly benefit commuters.”
In addition to the large contribution to the Storstrøm Bridge, the EU Commission also approved funding for several other Danish transportation projects.
Among them, Banedanmark will receive 29.5 million kroner towards retrofitting its railway network with the European Rail Traffic Management System (ERTMS), while the Danish Road Directorate (Vejdirektoratet) will receive 45.4 million kroner towards achieving the EU’s Intelligent Transport Systems (ITS) directive.
For more on the EU's TEN-T plan, view this video: