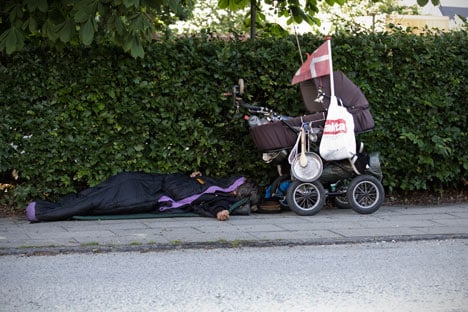 Tine Bramsen would like to see that Danish flag swapped out for a Swedish one. Photo: Colourbox
Denmark should adopt a get-tough attitude that makes it clear to foreign homeless people that they are not welcome in the country, a spokesperson for the governing Social Democrats said on Wednesday.
"We don't want to make Denmark a hotel with a reputation across Europe for free food and board," Trine Bramsen told Swedish Radio.
"We firmly believe there should be a ban against begging, a ban against spending the night in people's backyards. That way they will choose another country, for example Sweden, where they know they have better possibilities."
Begging is technically illegal in Denmark, but it's not black and white. Begging must be "active" and the police must warn the same beggar numerous times before it can be punishable by law. It's not enough for a person simply to sit with a paper cup and passively accept donations.
EU citizens receive warnings or fines for begging, while those from outside the EU may face deportation. Danish law prevents cities and organizations from assisting those without Danish personal numbers, making Copenhagen's shelters off-limits to those not in the country legally.
There are no exact numbers on how many foreign homeless people there are in Copenhagen. While Projekt Udenfor, an organization working with the city's homeless, estimates the population at about 200, Swedish Radio presented an estimate of 500.
The issue of foreign beggars is being discussed throughout Europe. In Austria, private detectives found evidence of an organized begging ring, while the Norwegian parliament has been mulling a ban on begging.