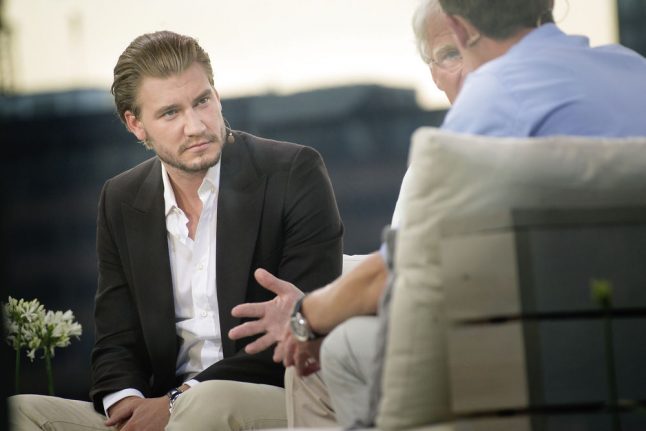 While he's waiting on a club to call, Bendtner is currently playing the role of football pundit on national television. Photo: Mads Nissen/STF

Danish footballer Nicklas Bendtner joined Arsenal as a 16-year-old and now, ten years later, he is on the verge of a very important career move as his contract with the Gunners expired this summer.

Big Ben, as the tall Dane has become known in England, has tallied 47 goals for Arsenal and an amazing 24 goals in 56 appearances for the Danish national team. Bendtner, who was brought to London by long-time Arsenal manager Arsene Wenger, has struggled to hold down a key role during his Arsenal career, competing with the likes of Thierry Henry, Robin van Persie, Emmanuel Adebayor and Oliver Giroud. Now the Dane is looking to get his career back on track elsewhere.

Rumours have been rampant regarding Bendtner's imminent future, but his high salary demand, own expectations and a shortage of relevant suitors have left his future uncertain. With the World Cup about to close, and the top leagues' pre-season preparations ready to commence, time may be running out for Bendtner.

According to media reports, the striker is now in talks with several potential clubs. Two in particular, Premier League outfit Aston Villa and Bundesliga side Eintracht Frankfurt, both seem to be very keen to sign the Dane.

Despite his several headline-grabbing shenanigans off the pitch, Bendtner is still seen as a splendid striker and great team player who, when on form, will bag in loads of goals everywhere. After all, his Denmark international numbers don't lie.