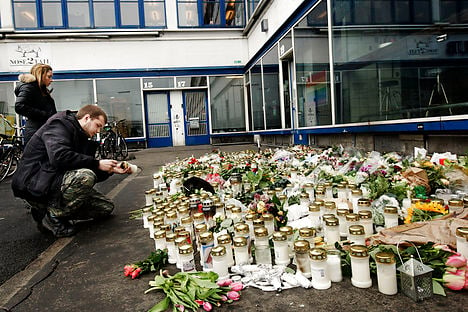 Many turned out to pay their respects to Jonas Thomsen Sekyere after he was stabbed to death in a Kødbyen hotspot. File photo: Andreas Beck/Scanpix
The suspect in a high-profile 2012 Copenhagen murder has been apprehended in Somalia, the tabloid Ekstra Bladet has reported.
The 29-year-old man is the primary suspect in the murder of 21-year-old legal student Jonas Thomsen Sekyere at a popular Copenhagen nightspot in November 2012.
Sekyere was stabbed in the heart inside the nightclub Bakken in Vesterbro’s meatpacking district, Kødbyen.
The murder, which police believe was unprovoked, caused an outpouring of sympathy from city residents.
Hundreds paid tribute to the victim outside of the nightclub and over 2,000 attended the young man’s funeral in Assistens Kirkegård in Nørrebro.
Shortly after the murder, Copenhagen Police arrested and released three young men suspected of being involved in the stabbing. Police then issued an international arrest warrant for the 29-year-old primary suspect.
Ekstra Bladet’s sources within Somalia confirmed that the man was arrested.
“I have visited him in jail,” the man’s cousin told the tabloid. “He is doing fine and is just thinking about his wife and two children in Denmark.”
Copenhagen Police have yet to confirm any developments in the case.
“I have absolutely no comment on the [new] information,” homicide detective Jens Møller told Ekstra Bladet.