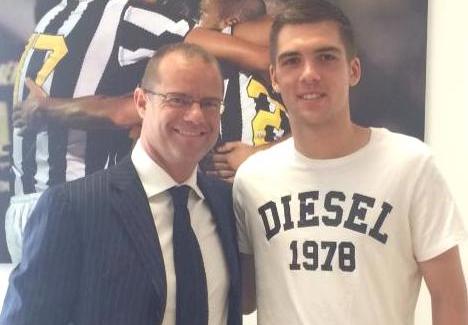 Adnan Curovic will make the jump from Lyngby to Juventus. Photo: Private

Young football starlet Adnan Curovic has been signed by Juventus. The now former Lyngby player and current Danish U16 talent Curovic announced today that he would be joining the legendary football club.

"I finally signed with Juventus!," Curovic wrote on Facebook. "Thanks to everyone who has been there for me and supported me during my career! I look forward to trying something new with a lot of challenges and development."

Juventus has been eyeing the young Danish talent for quite some time. In January, the club invited the young defender for a successful week long trial.

The 16-year-old from the Copenhagen suburb of Ballerup is described as a very athletic, agile and strong ball playing defender with a humble and dedicated attitude.

Curovic has so far played six games for the Danish U16-team and will now follow in the footsteps of former Lyngby youngster Frederik Sørensen, 22, who moved up from Lyngby to Turin in 2010. Sørensen, despite having not played for Juve in recent years, is still owned by La Vecchia Signora (The Old Lady), as the zebra-striped Italians are called back in their homeland.

Curovic joins a long and growing list of football talents from Denmark who have been picked up by major European clubs at a tender age, led by the likes of Pierre Emile-Højbjerg (Bayern Münich), Viktor Fischer (Ajax Amsterdam) and Anders Christensen (Chelsea).