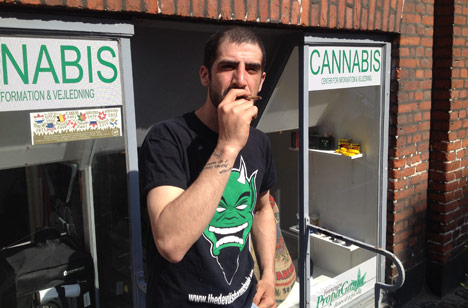 Khodr 'Cutter' Mehri outside his organization's headquarters in Amager. Photo: Justin Cremer
Copenhagen city officials have tried three times to legalize cannabis within the city. All three times, the answer from the national government has been a resounding no.
Led by Mayor Frank Jensen, the city council earlier this year tried again to receive an exemption from the nation’s drug laws in order to carry out a three-year trial to sell cannabis legally. Officials argue that the move would deal a crippling blow to the criminal forces behind the estimated one billion kroner generated annually through the illicit sales of the drug in the ‘freetown’ of Christiania.
Although the government once again shot down the proposal, with Justice Minister Karen Hækkerup saying in May it would “increase cannabis dependency on hash”, a prominent marijuana activist says it is only a matter of time until cannabis is legalized not only in the capital, but throughout all of Denmark.
“By 2020, you’re going to [be able to] come by my coffee shop and buy a pound of weed,” Khodr ‘Cutter’ Mehri told The Local.
Mehri is the chairman of the pro-marijuana association Foreningen Propaganja, which currently boasts over 400 members. Although the vast majority are Danes, the association also has members in Sweden, Norway, Iceland, the Faroe Islands, Greenland and even a member from Australia.
The 33-year-old has fought long, and very publicly, for a change in the nation’s marijuana laws. For nine months, he operated Copenhagen’s first Amsterdam-style coffee shop, Smokenhagen, before it was forced to close in early 2013 due to pressure from the building’s owner. Since then, Mehri has advocated for cannabis both in the streets and online, where he often posts photos of himself showing off his wares and smoking in public. He even once famously posted a video himself lighting up a joint in the Danish parliament building, Christiansborg.
“If you think, ‘Oh man, he’s got balls lighting a joint in parliament’ or ‘Oh man, he’s an idiot lighting a joint in the parliament,’ I just think I’m a cool dude doing what I stand up for and standing up for what I believe in,” Mehri told The Local from Foreningen Propaganja’s headquarters in Amager.
But Mehri’s openness about smoking and selling weed has had a tendency to land him in hot water. He was arrested in March 2013 on two charges of selling marijuana. He served one month of his six-month sentence and is waiting to hear if he will be required to serve the remaining time or be let off on house arrest.
As Washington prepares to become the second US state to legalize the recreational use of marijuana, The Local sat down with Mehri to talk about his activism, the current status of the legalization in Denmark and why he doesn’t like to go to Christiania any more.