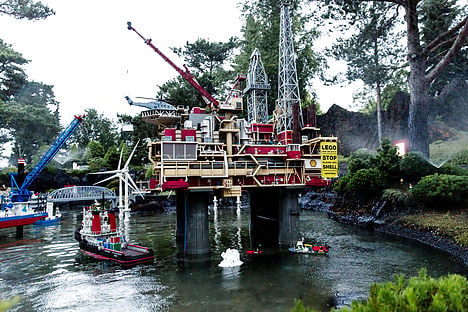 Greenpeace activists made a toy-sized protest in Legoland on Wednesday. Photo: Uffe Weng/Greenpeace/Scanpix
Seven Greenpeace activists are facing fines for a protest at the popular Legoland amusement park in Billund.
The Greenpeace activists hopped the fence to Legoland early Wednesday morning and assembled a protest scene with Lego figures in an action aimed at getting the Danish toy company to end its relationship with oil and gas giant Shell.
“Lego, the biggest toy company in the world, has built its brand on its continued promise of leaving a better world for children. And by teaming up with Shell it's letting kids down,” Greenpeace UK activist Ian Duff wrote on the organisation’s website. “Global warming is perhaps the biggest threat facing all children around the world, and protecting the Arctic is about protecting the climate. By letting Shell get its oily hands on kids' toys, Lego is allowing Shell to pretend it's a caring, family-friendly company and helping it to get away with its Arctic aggression.”
Greenpeace has initiated a global campaign in 26 countries to pressure Lego to end the relationship.
As part of the campaign, activists took to Legoland and hung banners on a toy Shell oiling rig in the park. The activists also put a Lego version of Greenpeace’s Arctic Sunrise ship in the water near the toy rig. Greenpeace carried out a similar action at the Legoland in Windsor, England.
The Lego and Shell partnership includes a promotion in which 16 million Shell-branded Lego std have been either sold or given away in 26 countries. According to Greenpeace, Shell’s petrol sales have risen by 7.5 percent during the campaign.
In a statement, Lego attempted to distance itself from the controversy.
“The Greenpeace campaign focuses on how Shell operates in a particular part of the world,” Lego Group CEO Jørgen Vig Knudstorp said in a statement. “It is our firm belief that this issue should be handled between Shell and Greenpeace. We are sorry to see the Lego brand being used as a tool in a dispute between organisations.”
Knudstorp said that the partnership with the oil and gas company would continue.
“We expect Shell to live up to its responsibilities regardless of where it operates in the world and that it will take appropriate measures in relation to any claims to the contrary,” he continued. “I would like to stress that we intend to live up to the long-term contract we signed with Shell in 2011.”
Regional newspaper JydskeVestkysten reported that the seven activists who entered Legoland have been fined by police.