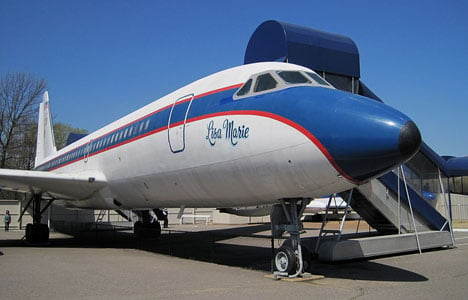 Coming to Denmark? Photo: Thomas R Machnitzki
Tourists have long flocked to Graceland in Memphis to immerse themselves in everything Elvis.
The mansion that was once the home to Elvis Presley draws overs 600,000 visitors a year who want to see the singer's gold records, jumpsuits and Pink Cadillac.
Among the attractions have also always been Elvis’s two luxury airplanes, the Lisa Marie and the Hound Dog II. But those planes could soon be gone, and Memphis’s loss just may be Denmark’s gain.
The company that operates Graceland, Elvis Presley Enterprises, has told the planes’ owner, OKC Partnership, that they should prepare to remove the jets by April of next year.
This news struck Henrik Knudsen, the operator of Graceland Randers, as an opportunity more golden than Elvis’ lamé jumpsuit.
Graceland Randers is an ‘event house’ that attempts to recreate the Graceland experience in the heart of Jutland. With an Elvis Museum, the Highway 51 Diner and an Elvis Shop, it is the place to be for Danish fans of The King.
According to Jyllands-Posten, Knudsen has been in touch with OKC Partnership and described the company’s reaction as “very positive” about the idea of moving the two luxury jets to Randers.
At the real Graceland in Memphis, Elvis Presley Enterprises plans to build a new hotel, theatre and restaurant. Neither Elvis Presley Enterprises and OKC Partnership have commented directly on the two airplanes making a cross-Atlantic journey to Randers.