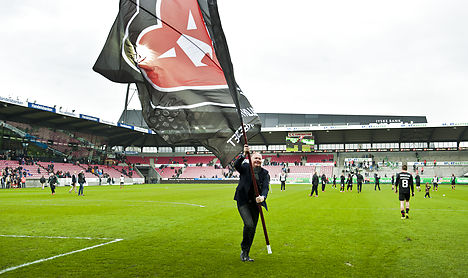 Happy Wolves. Photo: Lars Rønbøg/Scanpix
Brentford FC's owner, the entrepreneur and physicist Matthew Benham, has bought the majority of the shares in the Danish Superliga outfit FC Midtjylland – a team also known as The Wolves (Ulvene) – based in the Jutland town of Herning.
The 46-year-old Brit now owns 60 percent of the shares in FCM Holding after injecting the lion's share of the around £8 million (75 million kroner) of new capital the club has received from its current crop of investors like Dempo Global Corporation Pte. Ltd., Ejner Hessel A/S, H.T. Holding ApS, Johnny Rune og Poul Sand ApS. Benham's purchase also makes him the majority holder of the handball club FCM Handball.
Benham, having already sunk more than £43M of cash into his newly-promoted London-based side Brentford, with an aim to reach the promised land of the Premier League within a few years, is now looking to boost FC Midtjylland and make them a force to be reckoned with in years to come.
"FC Midtjylland has what it takes to develop into a successful club at the top of the league. An impressive talent setup, with a remarkable amount of academy-players making the grade, either to the first team or by being sold abroad. Football directors with a great passion for the game and the club and finally, it is a club with a strong foundation in it's region," Benham said on FC Midtjylland's official homepage.
FC Midtjylland finished third in the Superliga last season behind winners from Aalborg BK and runners up in FC Copenhagen.